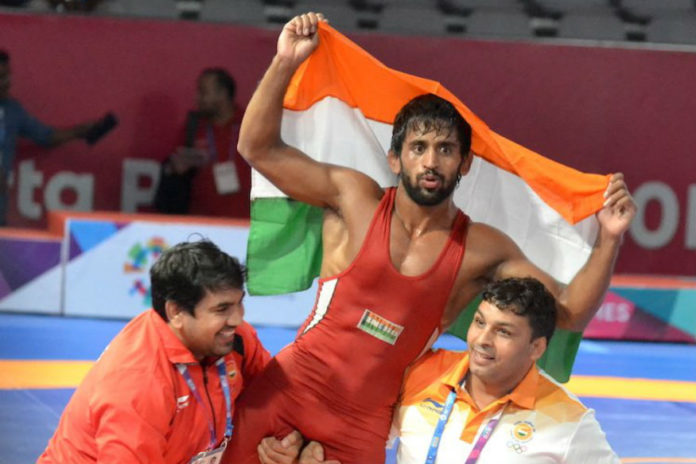 Renowned Indian freestyle wrestler Bajrang Punia overcame Cuba’s Alejandro Valdes at the semifinals of the World Wrestling Championships in Budapest on Sunday in the 65kg category. With this victory, the Asian Games and Commonwealth Games gold medalist ensured himself a silver medal at the biennial extravaganza. He could even stand at the top of the podium if he defeats Japan’s Takutu Otoguru in the final on Monday.

The 24-year-old had won a bronze medal at the 2013 edition in the 60kg category and will be satisfied with nothing less than the yellow metal. If he does so, he would become the second wrestler to win gold at the World Wrestling Championship after Sushil Kumar achieved the feat at the 2010 edition in Moscow in the 66kg category.

On his route to the finale, the 3rd seed took out Hungary’s Roman Asharin 9-4 in the first round, Korea’s Lee Seung Chul 4-0 in the pre-quarter finals, and edged out Mongolia’s Tomor Ochir Tulga 5-3 in the quarterfinals.

Earlier today, Sandeep Tomar bowed out to Azerbaijan’s Giorgi Edisherashvili at the Round of 16 of the 57kg category, Mongolia’s Unurbat Purejav hammered Sachin Rathi at qualification round of the 79kg category, and Deepak Punia lost to Ukraine’s Liubomyr Sagaliuk at the 92kg category.

Despite the earlier controversy of him getting snubbed for the Khel Ratna award to Virat Kohli, Bajrang Punia hasn’t let it affect his performance. The Sportsindiashow team wishes him all the best for his finals tomorrow.