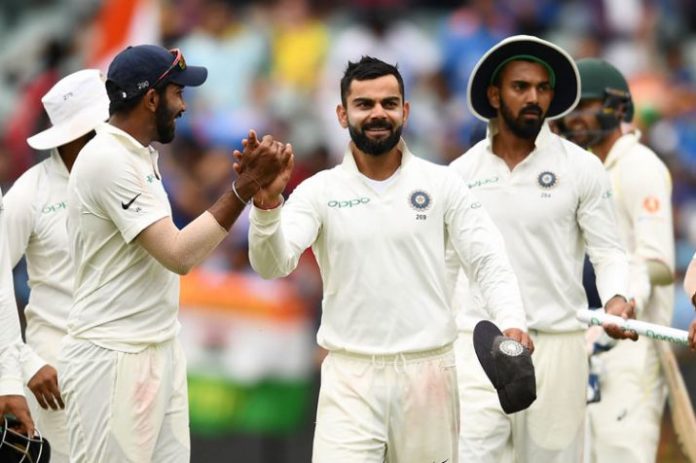 The WACA stadium, that has seen some memorable innings in the past now makes way for the new one on the other side of river Swan, when the visitors India take on Australia in the 2nd Domain test on Friday.

Through the years, the 22 yards of the WACA has always put forward a stern test to the batsmen. Assisting the bowlers from day 1, the pitch has seen everything from balls flying over the head to some unreal cracks on the deck.

The ‘new’ Perth wicket, which is set to become the 10th Australian stadium to host a test is expected to be no different. A green top is sighted to be taking shape ahead of the game. The curator too has stated that the wicket is likely to see such bounce that hasn’t been experienced anywhere before.

One might expect with such conditions at stake, the visiting team will be on the nervous side. But for Kohli and company, it is nothing less than complete excitement ahead of the game.

Team India put up an exceptional show on display at Adelaide to take a 1-0 lead in the series. The bowling unit ensured that the efforts from Pujara didn’t go vain as they secured a 31 run win bowling out Australia for 291.

Following the historic win at Adelaide, team India would have looked to continue with the winning eleven and not disturb the successful combination. But the good omens weren’t on their side as both Rohit Sharma and Ravi Ashwin had to stay out following their respective injures.

Following this, Captain Kohli announced a 13 man squad for the game, which sees the players such as Hanuma Vihari, Ravindra Jadeja, Bhuvneshwar Kumar and Umesh Yadav being listed.

From this 13, it looks probable that Vihari and Jadeja will be slotted in as the immediate replacements for the injured duo. But an option of an all seam attack cannot be ruled out keeping in mind the bouncy track at stake.

With Prithvi Shaw having make a quick and a remarkable recovery from his ankle injury he sustained in the practice game, pressure will be on KL Rahul to perform and retain his place in the side.

2018 has seen team Australia win just one test. Following the sandpaper saga, the side has hit a new low and now look to regain their shape ahead of the world cup next year.

Their bowling spearhead Mitchell Starc has also not looked at his best since his return. Him along with his partners will relish this conditions before them and will look to put up a solid show on display.

Captain Tim Paine has surprised everyone by retaining the same eleven that lost in the 1st test. This sees the local boy Mitchell Marsh sidelined to an extended spell on the bench.

Despite contributions from only Shaun Marsh and Travis Head in the Adelaide game, Paine has stuck with the same combo and expects them to put up a better show in the upcoming game.

As said earlier, the pitch on the eve of the 1st day is seen to be lush green. Only time will tell whether this wicket will fully turn out to be a bowler friendly one.

With the first day’s play expected to be the hottest, the team that wins the toss will look to bat first. The toss to India will be a crucial one as they’ll look to bat first and give their hero’s of Adelaide a much needed break.

The match is set to begin at 7.30 AM tomorrow with telecast on Sony Six and Sony Ten 3.