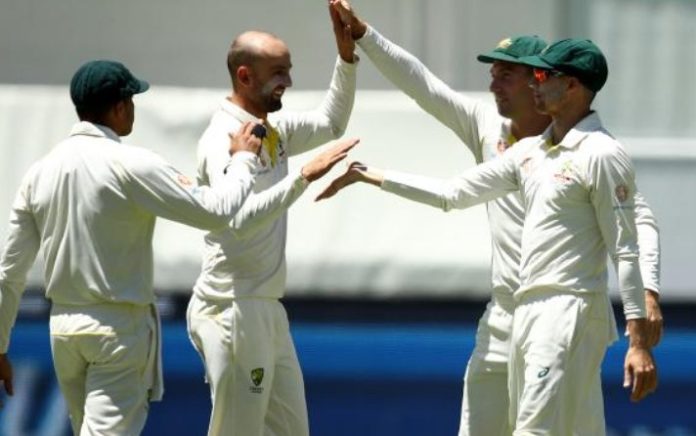 Australia registered their first win following the sandpaper saga in South Africa last March. India in pursuit of a chasing 287 were bundled out for 140 thus surrendering the match by 146 runs.

Australia registered their first win in over nine moths as they went on to beat India and square the series 1-1 at Perth. Needing 175 runs for a victory, the Indians were bundled out after just scoring 28 runs to their overnight score of 112-5. Pacers Mitchell Starc and Pat Cummins picked 2 apiece while Lyon removed the priced scalp of Rishabh Pant.

This win marked the first one for the new skipper of Australian cricket, Tim Paine. Their previous win had come in March when they ousted South Africa in their own backyard to win by 118 runs.

Australia, who won the toss on a green wicket chose to bat first leaving India exposed to the scorching heat at Perth. Their openers clicked as they went on to post a competitive score of 326. In reply to their first innings score, India got close to their target via a century from Virat and a fifty from Rahane. But they eventually fell short handing the hosts a crucial 43 run lead.

In the second innings, Mohammed Shami impressed with the ball as he picked up six wickets with Australia going from 192-4 to 243 all out. But needing 287 runs to win, the Indian batsmen once again failed to put runs on the board as they were bundled out for 140.

Nathan Lyon, who ended the game picking up 8 wickets including a five wicket haul in the first was rightly adjudged the player of the match. Speaking in the presentation ceremony following the match, he said that, “It’s amazing to play a role in a victory, haven’t had one in a while. Thanks to everyone. Can’t wait to sing the song. It’s fair to say we’ve been in a drought, so good to break. Was special to wrap the tail up quickly.”

Skipper Kohli when questioned on the team’s overall performance praised their efforts especially the bowlers who kept the game alive right till the very end.

“As a team I think we played well in patches which we can hold onto. Australia played much better than us with the bat. 330 on that pitch we felt was a bit too much. They deserved to win. We had the belief we could do it, but they were more relentless and put us in trouble. When you don’t win you don’t really rank your performances so it’s irrelevant because we didn’t get the result we wanted. I’m just focused on the next Test,” he said.

The series is now set up for a thrilling finish as both sides have a win each. The third test is set to begin on December 26th at Melbourne.