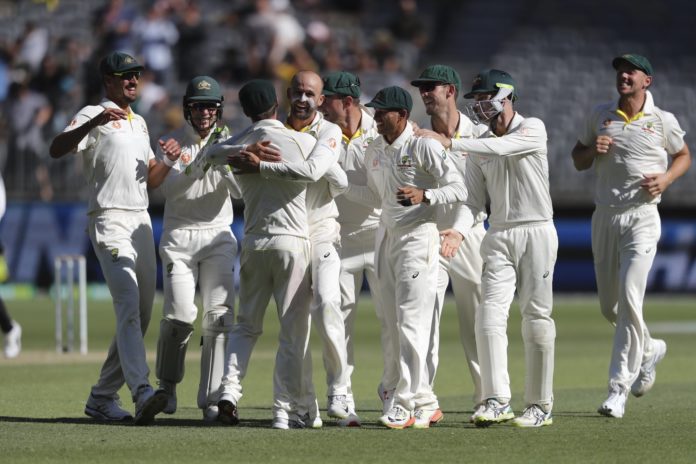 Chasing a challenging score of 287 in the deteriorating Perth wicket, team India got off to the worst possible start and are now stationed at 112/5 still needing another 175 runs for victory.

Australia are in the driver’s seat at the end of the day, taking three wickets in the final session, to put themselves in firm position to level the series. The visitors, on the other hand, are 175 runs behind with the last recognized pair of Pant and Vihari at the crease.

As usual the Indians got off to a poor start losing both KL Rahul and their ever dependable Cheteshwar Pujara within just 4 overs. Rahul (0) was dismissed in the very first over by Starc when he inside edged the ball onto the stumps in an attempt to leave it. Pujara nicked one behind of Hazlewood’s bowling to leave for 4.

Incoming captain Kohli and opener Vijay tried to stitch a crucial partnership and put an halt to the falling wickets. But their pair too didn’t last long. Nathan Lyon set up Virat beautifully and provoked him to play a forward defence that ended up in him edging it safely into the slip’s hands.

Vijay was once again nicely set up as Lyon broke through his gate and cleaned him up. Rahane had enough of defending and started to take the attack to the bowlers. But his approach too didn’t pay off as he was removed for 30 after holding out to Head at point.

The last recognized pair of Pant and Vihari then saw the team into stumps, leaving the side requiring a miracle to turn the tides and claim a victory.

Earlier in the day, Mohammad Shami took career-best figures of 6/56 to bundle out the hosts for 243. The Aussies had a morning session to enjoy has the pair of Paine and Khawaja went on piling the lead, without losing their foot.

However, Australia collapsed quickly as they lost five wickets for 15 runs in just eight overs with Shami, who was on hat-trick for the second consecutive Test but missed out, taking 4/26 in seven overs after Lunch.

Captain Tim Paine became the first victim of the day as he departed for 37 after gloving to India skipper Kohli at the second slip. Later, Shami claimed a crucial wicket of Usman Khawaja (72) with a sharp rising delivery to pick his fourth five-wicket haul in Test cricket.

With the lead at 250, the final pair of Hazlewood and Starc set out to frustrate the Indians adding 36 runs for the 10th wicket. Finally Bumrah rounded off the innings after beating Starc’s defence with the lead at 286.