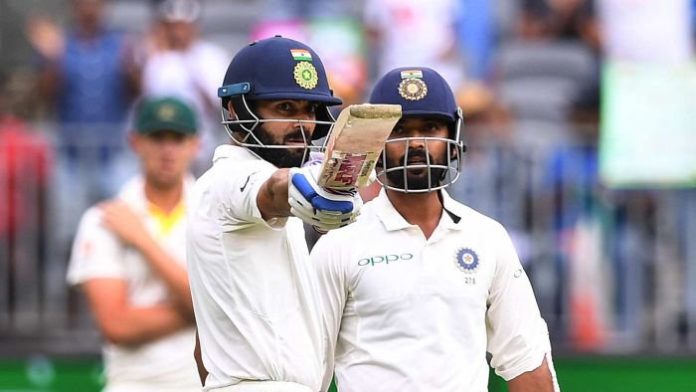 Following Australia’s early strikes, that left team India in a fix, Virat Kohli stitched up partnerships, first with Pujara and then with Rahane to end the day strongly on 172/3, trailing Australia by 154 runs with six wickets in hand. 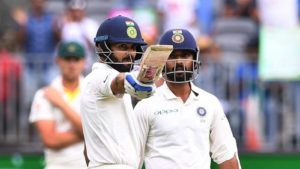 Mitchell Starc and Josh Hazlewood begun the Australian pace attack in an extraordinary manner, bowling some really unplayable deliveries to castle both Murali Vijay and KL Rahul. Starc opened the wickets column, knocking off Vijay’s stumps in the 3rd over. 13 balls later Rahul too lost his wicket this time falling to the delivery of Hazlewood.

Post lunch the Indian captain took Hazlewood on a ride before slowing down to deal with Pat Cummins and Nathan Lyon. While Kohli ticked away the scoreboard Pujara held the fort at the other end. By the time Pujara fell to Starc, India had already reached a commendable score of 82. Pujara played a slow but an important knock of 24 to keep the Indian score ticking.

Rahane, who then came in immediately took the pressure off Kohli. He raced past the 30-run mark in a quick time before slowing down his scoring rate. He reached his 50 at the stroke of Stumps and now stands on 51*. Kohli kept rotating the strike and brought up his half-century. With him steadily sitting on 82*, he looks all set to notch up yet another century vs Australia.

Earlier India had started the day on a back foot as the pair of Paine and Cummins put on a 59 run partnership to frustrate them. Umesh then returned to remove Cummins and  Bumrah immediately followed it up by picking up the price scalp of Paine an over later. Following this, Ishant Sharma closed the visitors tail in quick time to fold their innings at a score of 326.