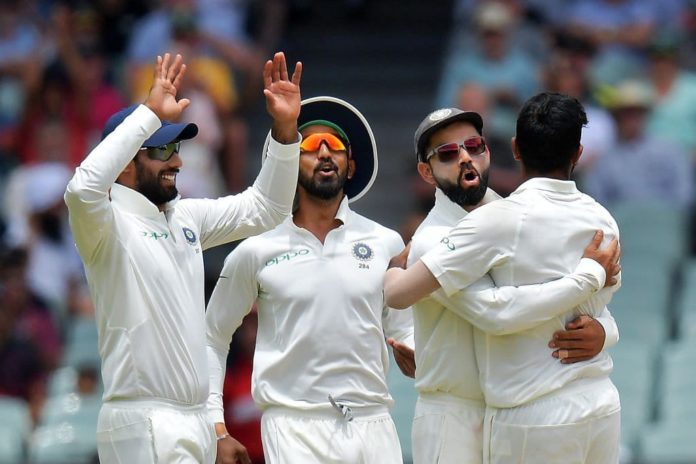 The Indian bowlers held their nerve despite a stubborn resistance from the Australian lower order to take a 1-0 lead in the Border-Gavaskar Trophy. 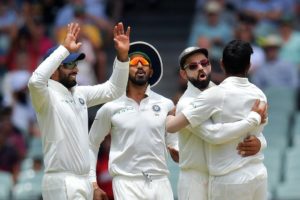 The lower order of Pat Cummins, Mitchell Starc and Nathan Lyon tried their very best to perform an almost impossible task, but the Indian bowlers finally found the way past their defence to win the game by 31 runs.

In the opening session, starting from an overnight total of 104/4, the Travis Head-Shaun Marsh partnership lasted just under eight overs before India forced a breakthrough with the old Kookaburra ball. Head, who was on 14 faced a over of bowling from Ishant, who set him up brilliantly and made him fall into his trap with ease. After repeated full balls, he pitched a short one that caught Travis Head by surprise, thereby resulting him to lob it in the air for a catch.

Marsh took over the responsibility from then and scored his first half-century in the fourth innings of a Test. This was also his tenth of his Test career. The big moment came in the 73rd over when Bumrah produced the slightest of edges to remove a well set Marsh, who was on 60.

After Marsh’s exit, Cummins joined hands with Paine, who was already looking set to repeat his heroics from the Pakistan Test last month. But resuming from lunch at 186-6, Australia lost their skipper in just the seventh ball after Bumrah outclassed Paine with yet another short ball. The ball prompted Paine to go for a pull. But it hurried on to him quicker than he expected only for Pant to take a simple catch.

Mitchell Starc and Pat Cummins frustrated India with a 41-run stand for the eighth wicket. While Cummins played a subtle innings at one end, Starc went about playing some lavish drives that saw the target drop below 100 runs. Finally in the 101st over, Starc was removed on 28, attempting to chase a wide ball from Shami only for Pant to complete his 11th catch of the game.

Following Starc’s wicket, Australia showed no signs of surrendering as Lyon then joined hands with Cummins to further frustrate the Indians. Tho duo added 31 runs for the 9th wicket and even threatened to run away with the game. But Bumrah returned to pick up Lyon.

Kohli, who caught Lyon was seen forcefully throwing the ball on the ground – a reaction that resulted due to immense frustration on the field. With just a wicket left to complete the formalities, Ashwin picked up the wicket of Josh Hazlewood to finish the game. Ashwin’s patience was finally rewarded as he picked up the final wicket in his 53rd over, just when Aussies were heading towards an unlikely win.

This win marks the first time that India have won the first test of a series in Australia. Rishabh Pant too created a record, finishing the Test with 11 catches – the most ever taken by an Indian wicketkeeper in a Test. Cheteshwar Pujara was rightfully adjudged the Man of the Match for his man winning contributions in both innings.

The second test is set to begin on 14th December at Perth. It will be followed by the third Test on Boxing Day in Melbourne and the series will end with the fourth Test in Sydney starting January 3.