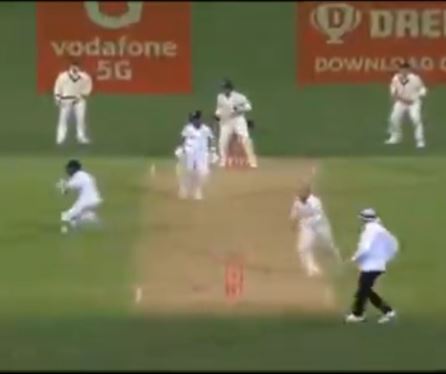 Virat Kohli and Ajinkya Rahane were steering the ship for the Indian side as they headed to close down Day 3 without adding any further casualties. Their well-made 88-run stand was brought to an unfortunate end after Virat Kohli was run out following a poor call for run by deputy Ajinkya Rahane.

With the score reading 188-3 after 77 overs, the priority for the visitors was to keep the scoreboard ticking without losing any more wickets. While handling the bowling attack with ease, especially during the much talked about twilight period, India were looking to acquire the pole position for the day.

In the final delivery of the 78th over, Ajinkya Rahane steered a harmless delivery to the offside and immediately called for a single. Kohli, trusting his partner, took off from the crease without a second glance. However, mid-way, Rahane who had a clear view of the fielder charging in at the ball, halted his run and shouted Kohli to return back.

The Indian skipper was fully committed to the run and had made it halfway down the pitch when he heard the vice-captain’s call. By the time he made an effort to return back, the ball had already reached Lyon’s hands who whipped off the bails, sealing an end to Kohli’s inspiring 180-ball 74 run knock.

Kohli could only stare at Rahane following the calamity who proceeded to raise his wrist and bat as a sign of apology. Check out the turning point of the innings right below:

Ajinkya Rahane, currently batting at 42, is joined by Hanuma Vihari with only a couple of overs remaining under the lights on Day 1.