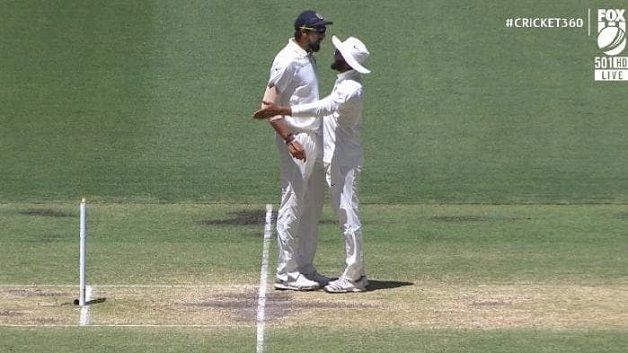 Team India squandered their chance to go 2-0 up on Aussie soil after collapsing to a tame defeat at the new Optus Stadium in Perth. To worsen their deteriorating situation, teammates Ishant Sharma and Ravindra Jadeja were seen having a quarrel on the field on the final day of the fixture.

Ravindra Jadeja, who came on to the field as a substitute fielder had a discussion with the pacer regarding the field setting. Things quickly escalated between the overs as the duo began to point fingers at each other near the pitch. Fellow teammates Mohammed Shami and Kuldeep Yadav had to diffuse the situation by separating them.

Ishant Sharma & Ravindra Jadeja were caught fighting & abusing on field yesterday. They were seen pointing fingers at each other in an animated argument. They were separated by Kuldeep & Shami. What's going on in Indian dressing room? #AUSvIND pic.twitter.com/j5fw5os0cD

The broadcasters were quick to pick up on this and Ricky Ponting, commentating for Channel 7, had to claim the following:

“Who knows what they’re talking about, it does seem very animated, there’s lots of finger pointing. Things have obviously got a little bit heated between these two,”

Meanwhile, the Indian management also released a statement regarding the same which denied the fact that Ishant Sharma and Ravindra Jadeja were involved in a fight.

“The incident between Ishant Sharma and Ravindra Jadeja was in no way a ‘fight’ and happened at the spur of the moment on the field. The management confirms that all is well between them.”

Full list of players sold in the IPL auction 2019