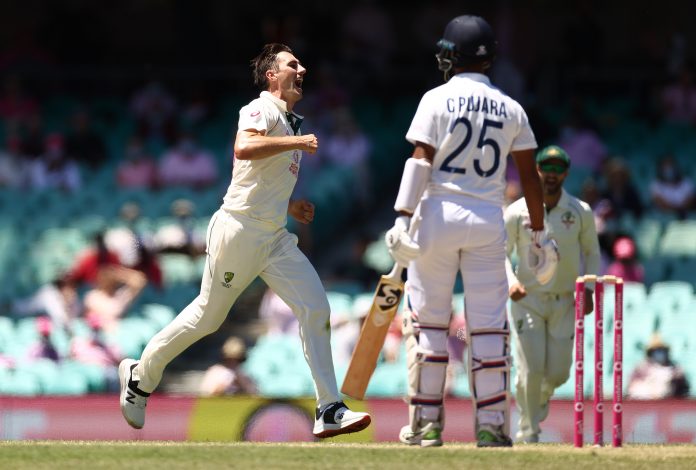 Team India restarted their innings on the Day 3 of the third test in the  Border-Gavaskar at SCG with 96 runs of the board at the expense of two wickets and trailing Australia by 242 runs.

Cheteshwar Pujara and skipper Ajinkya Rahane were at 9 and 5 respectively at the crease. On Day 2 India had made a solid start with Rohit Sharma (26) and Shubman Gill (50) and they were able to stitch a 70-run opening partnership.

It was truly a day of the Aussie bowlers as they have been excellent with the pink ball in hand. Pat Cummins came up with a breakthrough performance bagging four wickets.

Not only him but his fellow Aussie bowlers Mitchell Starc and Josh Hazlewood also tested the Indian batting line-up.

Cummins’ sharp bouncers were difficult to deal with and gave them a few bruises too. All-rounder Ravindra Jadeja got hit on his thumb and had to go for the scans during the final session. While wicket-keeper Rishabh Pant was hit on the left elbow and was taken for scans as well.

The hosts have battered and bruised the Indian batsmen as well. They struggled on multiple occasions and could not match up the bowling prowess of the Australian bowlers.

Even the visitors had to suffer run-outs on three occasions which further raises concern. India were bundled for 244 runs and Aussies started their second innings with 94 runs lead.

Wriddhiman Saha had filled in for Pant behind the stumps and it was a blessing for the Men in Blue as he was able to take a catch when Siraj dismissed opener Will Pucovski in their second innings. However, Jadeja’s injury would certainly be a big blow for the Men in Blue.

David Warner was also wiped off by Ashwin. But the dangerous pair of Labuschagne (47*) and Smith (29*) are at the crease going into the Day 4.

Aussies have a lead of 197 runs and 8 wickets still to spare with a couple of day’s play remaining.

Australia would be eyeing to put as many runs as possible to take a healthy lead and total to defend. It is to be seen whether the Indians are able to bounce back when the play resumes on Day 4 at SCG.

Ravindra Jadeja yet again proves his worth