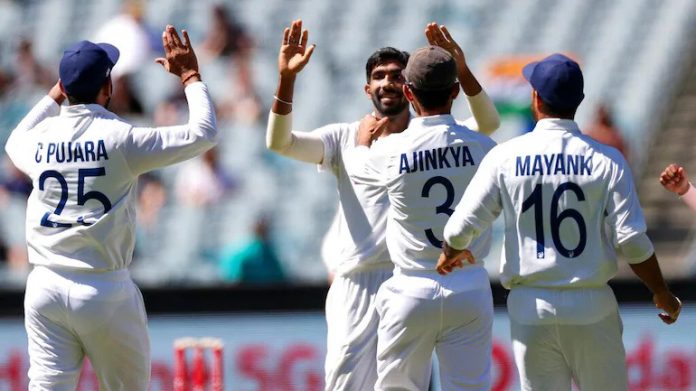 Team India began an uphill conquest to retain the Border-Gavaskar series after a huge defeat at Adelaide in the first test. Playing without the services of Virat Kohli and Mohammed Shami, the visitors skittled out the Aussies for 195 on Day 1 at the MCG under the leadership of stand-in captain Ajinkya Rahane.

Tim Paine elected to bat first after winning the toss with the same eleven from the first test. India had named their playing eleven which included four changes with Shubman Gill and Mohammad Siraj making their test debut for the nation.

Australia’s test opening woes continued in the absence of David Warner. Joe Burns was dismissed for a duck by Jasprit Bumrah. While fellow opener Matthew Wade looked in imperious touch with his aggressive approach, the early introduction of spin rewarded the visitors. Wade fell victim to a stunning catch by Ravindra Jadeja who completed the grab despite a collision with Shubman Gill on the field.

Ashwin’s supreme reign Down Under continued as he once again got the better of Steve Smith, whose slump since the 2019 Ashes continued. The former Aussie skipper fell for a duck with Ashwin’s plan involving a leg slip coming to satisfying fruition.

Marnus Labuschagne and Travis Head survived a few close calls and completed the first session without any more casualties. Rahane had opted to go for debutant Siraj in the second session which allowed the duo to get some momentum following the early dismissals. The duo strung a quality partnership of 86 runs for the fourth wicket.

Things fell apart for the hosts as Siraj and Ashwin aced with the ageing ball. From 124-3, the Australians slipped to 164-8. A brisk cameo by Nathan Lyon enabled the team to push towards 200, but they ultimately fell 5 runs short of the figure. Much like his heroics at this ground 2 years ago, Bumrah led the way with a four-wicket haul. He was well assisted by Siraj and Ashwin who collectively took 5 wickets.

India had to negotiate around an hour of day’s play with the bat to end the day. Mitchell Starc set the tone with a stunning first over with the new ball. The left-arm pacer, bowling with pace over 145 kmph, was getting the cherry to swing inwards into the right-hander.

Starc beautifully set up Mayank Agarwal and trapped him LBW in the final ball of the over. Fellow opener Shubman Gill was also troubled by the Australian pacers. The youngster was struggling initially and was almost dismissed back to the pavilion, but received a reprieve following a dropped catch in the slips.

However, he recovered soon and batted positively alongside Pujara to see out the rest of the overs to finish the day on 36-1. Ahead of Day 2, India trail by 159 runs with 9 wickets in hand.