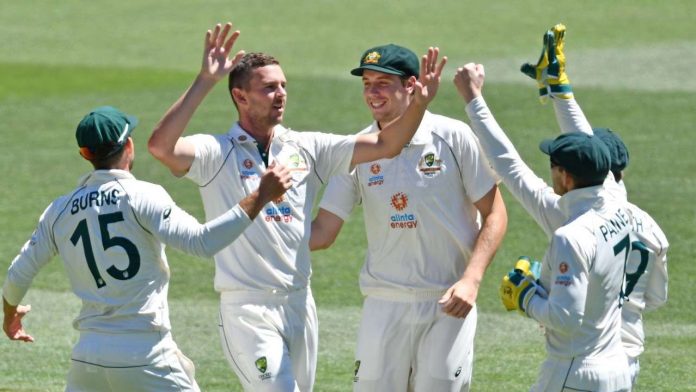 Going into the Day 3 of the 1st Test match of Border-Gavaskar at Adelaide Oval, India were seemed to be the favourites to clinch the win against Australia after having a 62 runs lead at the end of the Day 2.

India started the Day 3 with 9/1 score displayed on the board. The night watchman, Jasprit Bumrah and Mayank Agarwal were at the crease as the third day commenced.

The Aussie pacemen, Josh Hazelwood and Pat Cummins wrecked havoc at the Adelaide Oval. Their bowling performance being top-notch did not stand any chance for the visitors to remain at the crease and faced utter humiliation instead.

Josh Hazelwood’ five-wicket haul destroyed the Indian batsmen as they collapsed within the forty minutes time.

India were only able to tally 15 runs at the cost of six wickets. Moreover, not a single batsman could reach the double digits score.

Pat Cummins, who took the wicket of Prithvi Shaw, also wiped off Jasprit Bumrah for 2, sent Pujara for a duck and skipper Virat Kohli for 4. India saw an injury blow as well when Mohammed Shami was retired hurt.

The Aussie bowlers restricted the visitors to 36 runs, which is the lowest ever total in Test cricket.

After the Indian batsmen slumped to the bowling attack of the hosts, the scoreboard showed 36/9, giving the Aussies a target of 90 runs to lead the Border-Gavaskar Trophy series by 1-0.

The visitors were astounding with their bowling performance as the bowlers proved to be the game-changers.

The openers turned up to the crease to start the second innings to wrap up the game on Day 3. India dismissed Matthew Wade by run out and the star of the first innings for India with the ball, Ashwin sent Marnus Labuschagne to the dugout.

This had given a ray of hope for the visitors to pick up early wickets and make the hosts face the same fate as them.

But, Joe Burns scored a brilliant half-century, while the contribution from Mattew Wade before the dismissal was enough to emerge victorious at the home soil and lead the prestigious series by 1-0. Aussie skipper, Tim Paine was named the Man of the match.

Team India bundled out for their lowest ever test total of 36, Australia need 90 to win first test