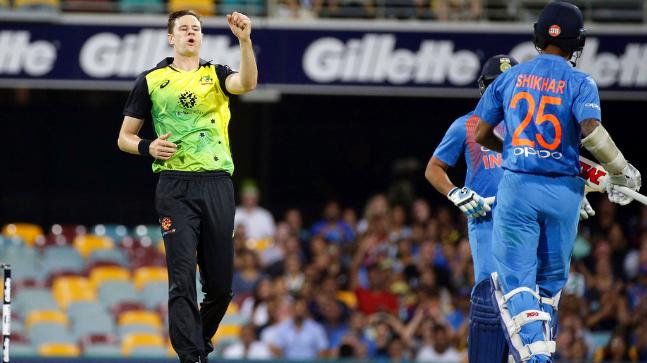 An out of shape Aussie side proved their worth in the shortest format with a close yet impressive victory over the No.2 ranked side in the shortest format. The home side, labelled as underdogs in their own backyards in this series made a major statement by denting the Indian side in all the departments.

Electing to bowl at The Gabba after winning the toss, India had a decent start with the ball as the pacers dictated the flow of the game until Chris Lynn took over. The hard-hitting batsman’s cameo changed the course of the game which was further proceeded by Glenn Maxwell’s blitz as well before heavens opened up.

The rain cut short Australia’s momentum who were at 152-4 after 16 overs, while their innings ended at 158-5 after 17 overs, the Men In Blue received a revised target of 174 to chase in 17 overs by virtue of the D/L method.

Rohit Sharma fell early and so did Indian skipper Virat Kohli which put pressure on the middle order. While Shikhar Dhawan played a free-flowing game en route to 74 off just 46 balls, he was dismissed by Billy Stanlake.

Leg-spinner Adam Zampa strangled the flow of run scoring with an economical spell that also included the crucial wickets of Virat Kohli and KL Rahul. The task of getting India over the line was on the shoulders of Dinesh Karthik and Rishabh Pant. With 60 needed off the last 4 overs, the duo took 25 off Andrew Tye’s over to bring the equation down to 35 off 18.

Things were looking evenly poised with the duo still at the crease, things took a turn for the worse as Pant played an ill-fated shot to end his stay in the middle. New-comer Krunal Pandya could not handle the pressure and despite Dinesh Karthik’s late heroics, it failed to steer the side home as the Blues fell short by 4 runs.

Who do you think will win the Australia vs India 1st T20 match?