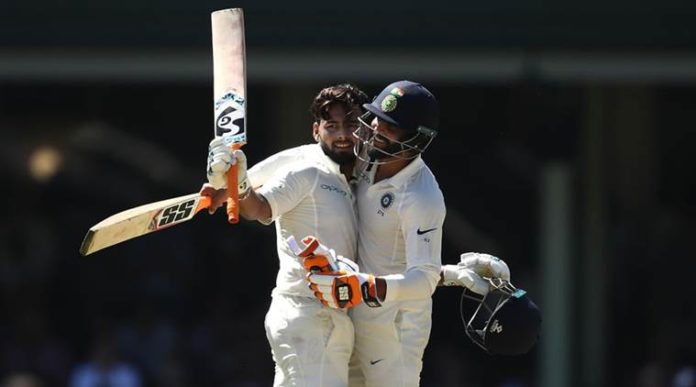 A mammoth 204-run stand between Rishabh Pant and Ravindra Jadeja for the seventh wicket helped India attain a mammoth first innings score to jeopardise the hosts’ hope to salvage the series.

Wickets were scarce as runs flowed much to the dismay of the Aussies on Day 2. After an impressive outing on Day 1, India took it up a notch to potentially take the world champions out of the game.

Resuming the day on 303-4, Pujara continued his work from Day 1 along with Hanuma Vihari at the other end. Nathan Lyon was first to strike with the wicket of Vihari, the spinner struck yet again to dismiss Pujara, who was 7 runs away from a stunning double hundred.

Rishabh Pant, who began things with caution, cranked up the gears en route his 2nd Test hundred. Ravindra Jadeja provided good company and helped himself to a half-century. The staggering partnership was brought to a screeching halt with the dismissal of the all-rounder on 81 while Pant remained unbeaten on 159.

With a first innings total of 622-7, the Men In Blue decided to declare to expose the Aussies at the end of the day’s play. The openers escaped unharmed after the brief spell by the Indian bowlers which also saw Rishabh Pant put down a chance.

Sachin Tendulkar seeks out hotel staffer who helped him make a...