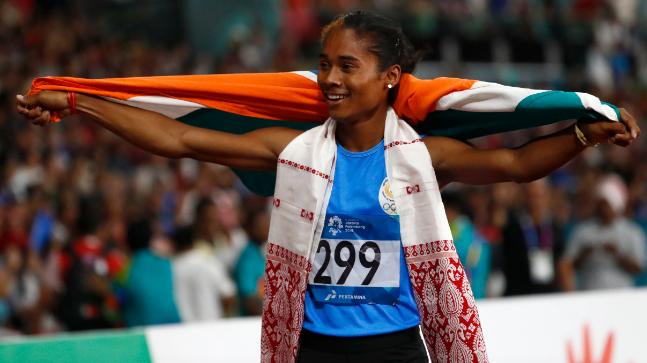 The sprinter declared the same by tweeting, “I’m honored and grateful to be the first UNICEF India Youth Ambassador. I look forward to encouraging and supporting children to achieve their dreams.” Here is the pertaining tweet:

I’m honoured and grateful to be the first @UNICEFIndia Youth Ambassador. I look forward to encouraging and supporting children to achieve their dreams. Join me and #GoBlue this #ChildrensDay pic.twitter.com/7gpgYCJQni

Hima Das, along with Raju Poovamma, Saritaben Gayakwad, and Vismeya Koroth struck gold for India at the 2018 Jakarta Asian Games in the Women’s 4x400m relay by clocking at 3:28.72. The 18-year-old also clinched a silver medal in the Mixed 4x4oom relay and the Individual Women’s 400m race. By coming second at the latter event, she broke her own national record.

Earlier this year, Hima Das also won a gold medal for the nation at the IAAF World U-20 Championships in Finland, a feat no one achieved in the Track section for India.

The Assamese girl, fondly called as Dhing Express- after the name of her village, was also conferred with the Arjuna award by the President of India on 25 September 2018.