Yesterday, 16-year-old Saurabh Chaudhary became a national sensation after shooting an impressive Asian Games record score of 240.7 to clinch the gold medal in 10m Air Pistol event, it looked like he is going to be the youngest medalist in the Indian squad. But 15-year-old Shardul Vihan proved everyone wrong as he won a silver medal in men’s double trap shooting event on Thursday. 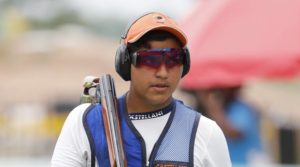 The teenager from Uttar Pradesh, Vihan shot 73 to claim the silver medal, while Korea’s 34-year-old Shin Hyunwoo clinched the gold medal with a score of 74, whereas Qatar’s Al Marri Hamad Ali bagged the bronze after shooting 53 at the Jakabaring shooting range.

The Silver medal took India’s medal tally to No.9 with 4 Gold, 4 Silver and 9 Bronze medals.

It’s safe to assume the future of Indian shooting is safe under these upcoming talented teenagers who have been making India proud in the 18th edition of Asian Games.