A close fight between Thapa and Mongolian Byambatsogt Tuguldur produced a victory for the Indian pugilist. There were some heavy blows landed on each other by Thapa and Tuguldur right from the start, making it a very close match. However, it ended up being a 3-2 split decision victory in favor of Thapa.

A quarterfinal bout will now be contested between Thapa and the winner of Haidara Alasaly vs Minsu Choi.

Coming to the women’s section, seven boxers from the country, including Tokyo Olympics bronze medalist Lovlina Borgohain, will start their campaign in the quarterfinals on Saturday.

A total of 267 boxers from 27 countries are taking part in the competition. 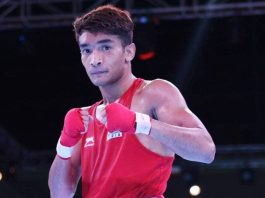