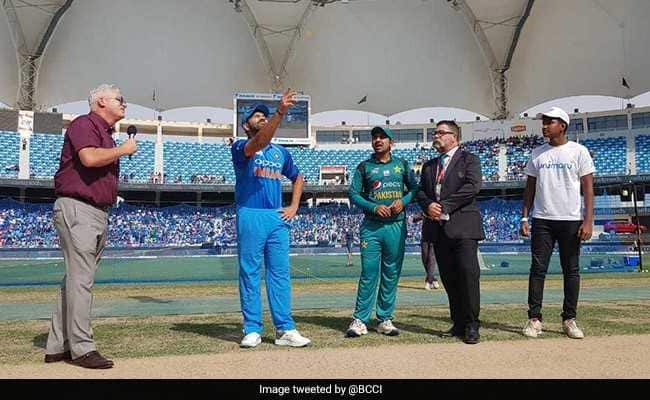 Team India shook off their rustiness with a clinical display over arch-rivals Pakistan. The Men In Blue managed to come out on top across all the departments of the game en route to an eight-wicket victory with 126 balls remaining.

Losing the toss yet again, Rohit Sharma and co. were forced to bowl first in the scorching heat which took it’s first victim in the form of Hardik Pandya who had to be stretchered away from the field for further assessment.

A stunning spell by Bhuvneshwar Kumar and Jasprit Bumrah early on in the innings reduce the Men In Green to 3-2 before Babar Azam and Shoaib Malik took the task of repairing the innings.

The duo managed to stitch an 82 run stand before Kuldeep Yadav managed to dismiss Azam with a beauty. The Champions Trophy holders could not recover from the blow and spiralled down to fold out for just 162 with Bhuvneshwar Kumar and Kedar Jadhav ending up with 3 wickets each.

Indian openers took things slow against the Pakistan pace battery before settling into a rhythm. Sharma played a captain’s knock of 52 off 39 before being cleaned up by Shadab Khan. Dhawan continued his fine touch with a steady inning of 46. Dinesh Karthik and Ambati Rayudu ensured that the Blues coast to victory without losing any wickets.

Man Of The Match: Bhuvneshwar Kumar

Asia Cup 2018: The Blues ready to kick things off against wounded Hong Kong