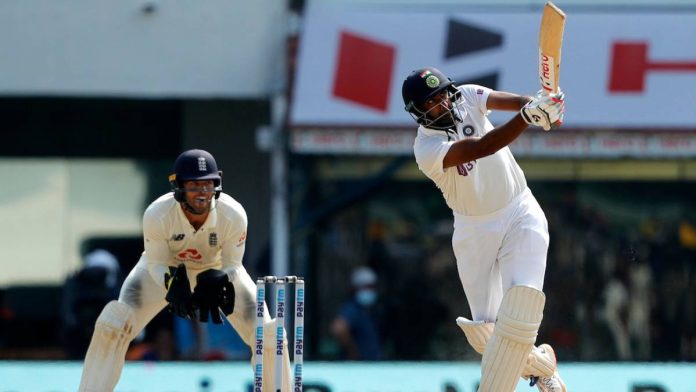 Team India have bounced back quite well in the second Test against England in Chennai. While the Day 2 belonged to R Ashwin – the bowler, the next day belonged to Ashwin – the batsman as well. Ashwin took a fifer and troubled England batsmen yesterday whereas he stitched a 96-run partnership for the seventh wicket along with Virat Kohli and scored a magnificent century as well.

His century helped the team put up 286 on the board and set a huge target of 482 runs. Meanwhile, the visitors have lost 3 wickets for 53 after 19 overs at stumps with two days in hand as well.

However, the day started with the bizarre run-out of the veteran Cheteshwar Pujara who stepped out of his crease to play a shot but failed to reach on time as his bat got stuck and fell from his hand and eventually got out. Later, the host lost their second wicket when the score was on 55 when Ben Foakes stumped Rohit Sharma.

Rishabh Pant, who was promoted in the batting order to counterattack Jack Leach failed to make an impact as he was stumped for only 8. However, India were struggling at 65 for 4 and soon Moeen Ali provided with two quick breakthroughs where Ajinkya Rahane caught at short leg before he trapped Axar Patel before the stumps. Although the lead crossed 300, at 106 for 6, the host were in trouble in the second innings as they were on the verge of being bundled out for under 120 as well.

But Virat Kohli and R Ashwin had other plans in mind. They stitched 96 runs for the seventh wicket on a difficult wicket to bat on. While Kohli played a rather defensive knock, Ashwin took on the bowlers from the beginning. They both used the pitch quite well where they used their feet against the spinners as well.

Meanwhile, Kohli, who failed to get a hundred, showed his patience and batting skill and scored a fifty as well. On the other hand, Ashwin registered his fifth Test hundred in front of his home crowd which showed full of composure, class and authority. He got out for 106 off 148 balls ending India’s innings at 286 as well.

Got a mammoth total of 482 for a win, debutant Axar Patel provided with the first breakthrough as he trapped Dom Sibley before the stumps in the 9th over of the innings. Later, Dan Lawrence and Rory Burns started to resurrect the innings and counter the Indian spinners well too. But it was Ashwin, who broke the 32-run stand dismissing Burns caught at the second slip of Virat Kohli.

After that, Patel cleaned up Jack Leach in the very next over to reduce England to 50 for 3 as they ended the day at 53 for 3, needing 429 runs for a win. As of now, the hosts have the upper hand and they would surely try to finish the game as soon as possible.