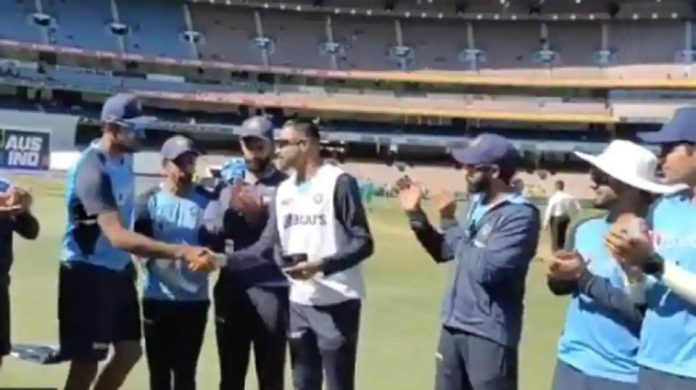 Team India have been playing their second test of the four-match Test series against Australia. After having lost the first one by 8 wickets, they brought four changes, which also included two debutants – Shubman Gill and Mohammed Siraj. However, Siraj got his cap from the veteran Ravichandran Ashwin, whose small speech was enough to describe the journey of the youngster. 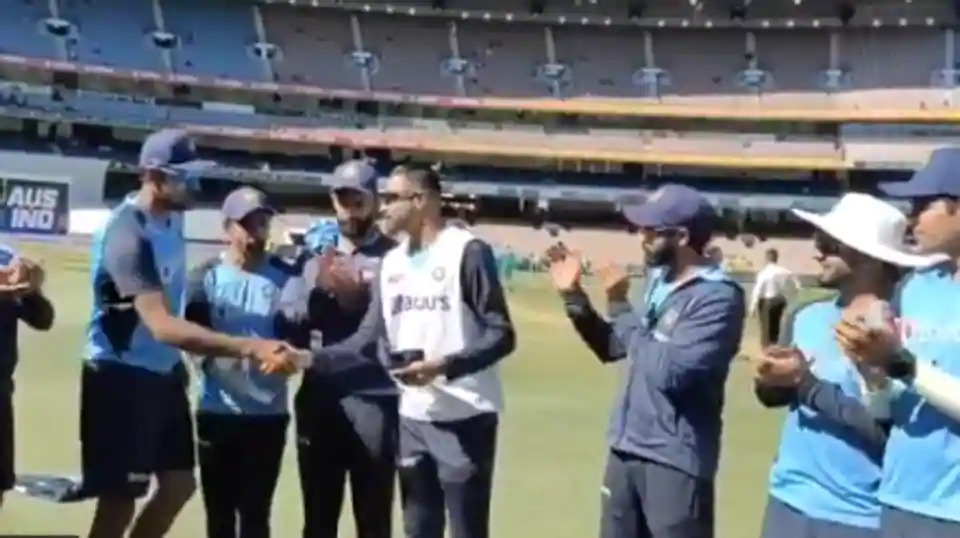 Ashwin acknowledged Siraj’s talent as he was a great find of domestic cricket and India A and he has ‘earned’ his right to play for India in the longer format of the game while handing the speedster his Test cap at the MCG on Saturday.

“Coming through First-Class grind and India A grind, you have earned this Test cap. You will rally around with the team throughout this Test match,” R Ashwin said to Siraj before giving him the cap just before the start of the second Test against Australia where the rest of the Indian players were seen cheering and clapping for him.

Notably, Siraj came into the playing XI in place of the injured Mohammed Shami, who has been fractured his wrist after being hit by a Pat Cummins bouncer in the second innings of the first Test in Adelaide. However, he has tasted a fair share of success for Hyderabad in the Ranji Trophy and also for India A to earn his maiden call-up in Test.

However, not only this but he had battled a personal tragedy too as he lost his father during the Australia tour and took a brave decision of staying there with the team instead of returning home. “He battled personal tragedy, fought adversity and is now rewarded with India’s Test 🧢 no. 298. Congratulations Mohammed Siraj. Go seize the day!” tweeted BCCI.

Meanwhile, alongside Mohammed Siraj, youngster Shubman Gill too made his debut in the second Test against Australia on Saturday. He replaced the out-of-form Prithvi Shaw in the playing XI and received the cap from the head coach Ravi Shastri.

“The moment when your dreams come true. No better stage than the Boxing Day Test to make your maiden Test appearance. Shubman Gill is now the proud holder of India’s Test cap No. 297,” tweeted BCCI.

The moment when your dreams come true. No better stage than the Boxing Day Test to make your maiden Test appearance. @RealShubmanGill is now the proud holder of India's Test cap 🧢 No. 297. #TeamIndia #AUSvIND pic.twitter.com/G0kdE9TgNU

Notably, it was in 2013 against West Indies at Kolkata when India played with multiple debutants last time and the debutants were Rohit Sharma and Mohammed Shami. And, against Australia, it was in 2004 at Mumbai where Dinesh Karthik and Gautam Gambhir were the debutants.

However, this is only the 4th time that India are playing with more than one debutant in a Test match in Australia. The last time it was in 1967 at Adelaide where Umesh Kulkarni and Syed Abid Ali made their debut. Meanwhile, this is the 1st time for any team to play with multiple debutants at MCG since 1993. South Africa were the last team who played with Gary Kirsten and Fannie de Villiers as debutants.