A bout of lightning and light ran ended Day 2 a bit earlier than the close-out time. But, it was a day Australia relished as they posted a commanding first innings total and scalped 2 wickets with the new ball under the lights to peg back England.

Australia resumed from a commanding position of 221-2 on Day 2 at the Adelaide Oval. Marnus Labuschagne had luck on his side again in the morning session. He was caught behind by Jos Buttler off Ollie Robinson after reaching his hundred, but the decision had to be reversed after the bowler was found to be overstepping. 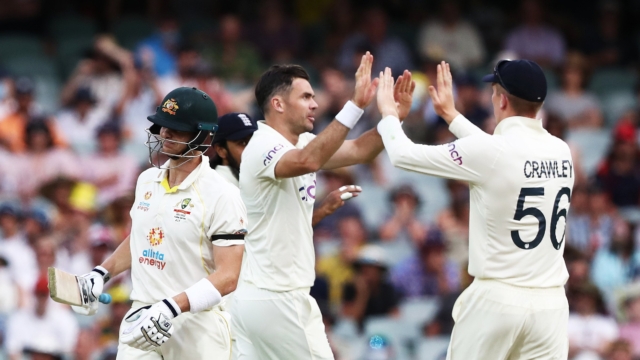 His luck did not run too long after was trapped LBW by Ollie Robinson in his next over. Travis Head provided good company to captain Steve Smith, but was outfoxed by a flighted delivery by Joe Root.

Australia seemed to be slipping into a collapse after Cameron Green was castled by Ben Stokes for just 2. Home-town hero Alex Carey then shared a vital partnership with Smith. He also recorded his maiden Test fifty in the process.

James Anderson came into the fore by claiming two wickets near the session’s end. He dismissed Smith for 93, making him the second player in the innings to be out in his nineties. Alex Carey’s wicket closed out the second session of the day.

Australian tail played with aggression and frustrated the England bowlers. Mitchell Starc and Michael Neser scored 39 and 35 respectively to boost their first innings score to 473-9.

The hosts struck early with the new ball under the lights. Starc sent back the struggling Rory Burns for the second time in this series. The left-handed opener could only score 4 before edging one to Smith in the second slip.

Michale Neser claimed his debut wicket in the very first over of his Test career. Hameed had to walk back to the pavilion following a soft dismissal. At Stumps on Day 2, England are 17-2 with Joe Root and Dawid Malan at the crease.