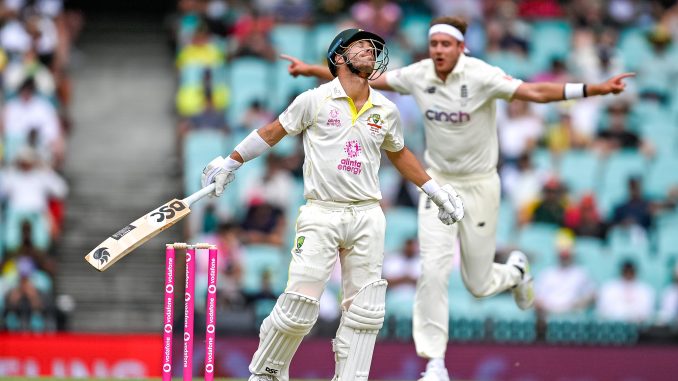 Australia and England made their way to Sydney for the Pink Test, the fourth in the ongoing Ashes series. While the hosts have already claimed the series and have an unassailable lead of 3-0. A heavily interrupted day due to weather, saw Australia score 126-3.

At the toss, Cummins called the right side of the coin and chose to bat first. Australia had announced a solitary forced change in their playing XI. Travis Head was not eligible for selection after testing positive for COVID-19, Usman Khawaja was named as the replacement in the middle order.

On the other hand, England also named a single change from the team that endured a humiliating innings loss in the Boxing Day Test. Stuart Broad returned back to the fray replacing Ollie Robinson in the bowling attack.

The new ball duo of Anderson and Broad made the ball talk in the early overs in the first session. The 39-year-old veteran seamer marked his 169th Test appearance, overtaking Steve Waugh and Ricky Ponting in the process. He only stands second in the list, right behind Sachin Tendulkar, who leads with 200 Test matches.

The rain made its first appearance for the day early in the session. David Warner and Marcus Harris shared a fifty-run stand for the opening wicket. Broad rekindled his old rivalry with Warner by getting him out for 30. Coming around the wicket, Broad got the ball to shape away from Warner. Zak Crawley safely caught the ball in the slips to send the batter back.

Rain continued to interrupt the day’s proceedings on a regular basis. The hosts were looking to finish the day with the fall of a sole wicket. However, England struck twice in quick succession near the end of the day’s play.

Anderson was rewarded for his probing display with the wicket of Marcus Harris. Speedster Mark Wood removed No.1 ranked batsman Marnus Labuschagne for 28. Steve Smith and Usman Khawaja saw off a short phase of play to end with 126-3 at stumps on Day 1.