Arsenal ran out 4-2 winners against Tottenham Hotspurs in one of the most memorable North London derbies of recent times. The Gunners were trailing by a goal at the end of the first half but completed a miraculous comeback and earned the three points. The result took Emery’s side above their arch rivals in the Premier League table. 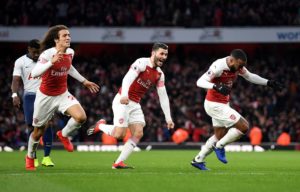 The scoring was opened in the 10th minute when Jan Vetronghen handled the ball in his own penalty area and referee Mike Dean pointed to  the spot without hesitation. Pierre Emerick Aubemeyang made no mistake from the spot. Arsenal’s jubilation was short-lived, however, as Eric Dier headed the ball home in the 30th minute at Leno’s near post, a save he should have made. Four minutes later, Rob Holding conceded a penalty which Harry Kane slotted home with ease.

Heading into the second half was a different Arsenal side altogether. Clinical, precise, decisive. Aubemeyang scored his second in the 56th minute to bring the Gunners on level terms with a brilliant first time shot. Alexander Lacazette gave them the lead with a grounded effort from long range in the 74th minute, something Lloris should have probably dealt with. Three minutes later, Lucas Torreira, who had a brilliant game, doubled their lead and sealed the game for Emery’s side.

The Gunners face a stern test next week as they travel to Old Trafford to face a struggling Manchester United while Tottenham face Southampton.

Liverpool seal Merseyside derby win in the most indescribable fashion

United to move for England no.1 Pickford worth $80M if De Gea leaves