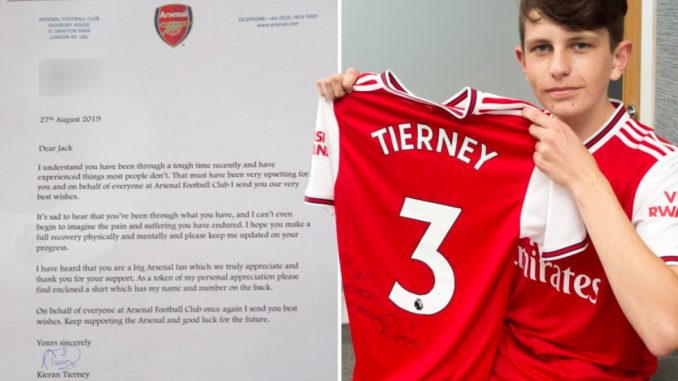 Kieran Tierney, the latest Arsenal signing from Celtic is already winning hearts in North London after his touching gesture for a young Arsenal fan who was attacked by bullies for wearing an Arsenal home kit.

The wingback sent the young fan Jack Staniard, a kit with his name and number on the back with a heart-touching note.

Tierney’s note read: “Dear Jack, I understand that you have been through a tough time recently and experienced things most people don’t.

“That must have been very upsetting for you and on behalf of everyone at Arsenal Football Club I send you our very best wishes.

“It’s sad to hear that you’ve been through what you have, and I can’t even begin to imagine the pain and suffering you have endured.

“I hope you make a full recovery physically and mentally and please keep me updated on your progress.”

He added: “I heard you’re a big Arsenal fan which we truly appreciate and thank you for your support.”

The schoolboy said: “I think Kieran is amazing – I had no idea until my mum sent me a picture of him with the top.

“I didn’t believe her at first and then it later arrived with the letter.

“I’d like to thank him very much for what he did for me. I’m a fan of both Arsenal and Tierney.

“I’ve known who he is since he started playing for Celtic. I know where he’s from and some of my mates have met him and said he’s a really nice guy.”

The attack is not disclosed and is unclear as it is an ongoing case. Local police have arrested a 15 year old responsible for the bullying of Jack.

Kieran Tierney is Scotland’s most expensive player of all time but his gestures have been priceless.