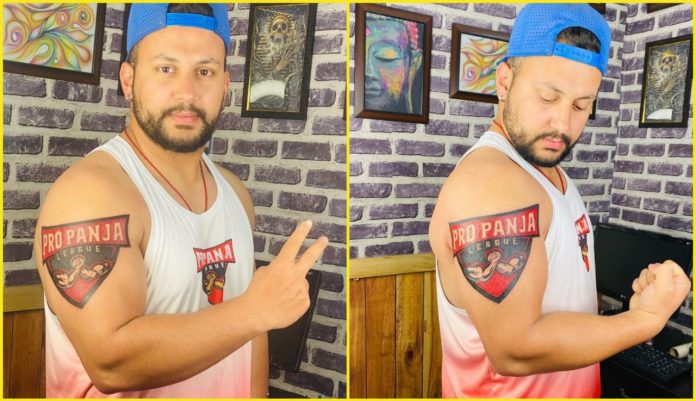 Arm Wrestler Harman Mann has been one of the top Arm Wrestlers in the country. He has taken part in numerous Pro Panja League events. He was the Silver medalist in the first ever Pro Panja ranking tournament which took place in Delhi in 2020 at the Thyagaraj Stadium in New Delhi. He also took part in the Pro Panja Mega Matches-1 event which took place at the Radio Club in Mumbai.

He is currently preparing for the Pro Panja ranking tournament which is scheduled to take place in Gwalior, Madhya Pradesh from 22nd July to 24th July at the The Lakshmibai National Institute of Physical Education.

Ahead of the tournament, Sports India Show had the opportunity to chat with Harman Mann about his newest Pro Panja League tattoo.

“I have been Arm Wrestling for ten years and ever since PPL came into existence, the changes that have happened in the Arm Wrestling circuit, I have become a very big fan of Pro Panja League. Fans do a lot of things, So, I thought I should do something and become a permanent fan of the PPL. So I thought about doing something different and unique and hence I got the Pro Panja League’s logo tattoed on my shoulder area.The love and respect I have for PPL is unconditional and the tattoo is just a way of expressing my feelings.

“I was thinking about getting an arm wrestling tattoo for quite some time now but I never initiated it, so when PPL came and I saw how Arm Wrestlers are getting treated, then it immediately came to my mind that I should get a PPL tattoo done.

However, Harman Mann isn’t done yet as he told the Sports India Show that, he plans on getting even more tattoos made.