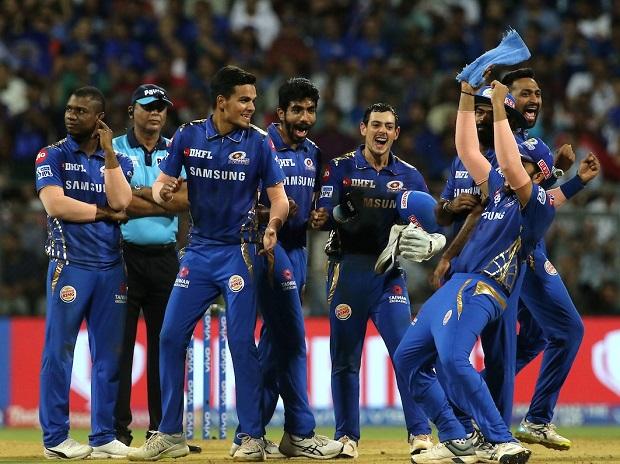 Defending champions Mumbai Indians (MI), with 16 points, have sealed a spot in the playoffs after Kolkata Knight Riders lost to Chennai Super Kings in a nail-biting finish on Thursday.

KKR’s defeat means that Mumbai Indians cannot finish below fourth at the end of the Indian Premier League (IPL) group stage. Mumbai will still want to win at least one of their next two matches to ensure a top-two finish, meaning they will directly play the first qualifier. Apart from leading the table on points, MI also boast the best NRR in the league.

They have dominated most matches and in most of the matches they lost, have been too close to call. Out of the four defeats they’ve suffered, one went down to the last over against CSK while two of them came in Super Overs. Such competitiveness and consistency gives them a clear edge over their title rivals. Going into the playoffs, that makes them overwhelming favourites to defend their crown.

Apart from Mumbai Indians, the Royal Challengers Bangalore (16) and Delhi Capitals (14) are just a win away from booking their places in the knockout stage. However, a resurgent Kings XI Punjab and the on-and-off Kolkata Knight Riders are in the hunt for that all-important last remaining berth. Only two matches remain for either of them to secure their place and as a result, it’s hard to separate either team to make it to the top four.

For years, skipper Rohit Sharma has been the batting mainstay for the four-time champions. However, he has missed their last three games with a hamstring injury. Per se he is back in training, but the timeline for his comeback is not known yet. It is thus unclear whether he’ll be able to take part in the playoff games now that Mumbai Indians have secured their place in the knockouts.

Up top, Quinton de Kock has seen a steady rise in the form and even in Rohit’s absence, Mumbai Indians have the likes of Ishan Kishan, Hardik Pandya, Suryakumar Yadav and not to forget Kieron Pollard who have stood firm and made telling contributions to the team’s cause.

For MI, Quinton de Kock has been the leading run-scorer with 392 runs while Jasprit Bumrah has the highest wickets with 20 scalps.

Talk of the town, Suryakumar Yadav plundered 512 and 424 runs in 2018 and 2019 respectively since rejoining the Mumbai Indians. He has continued his purple patch in the IPL, and so far has amassed 362 runs from 12 fixtures at an average 40.22 in this edition. A bulk of those runs — 335 — have come in the UAE capital, where the Mumbai Indians are residents of.

The defending champions kicked off their campaign with a loss against CSK in the opening day clash. After defeating KKR in their second fixture, they couldn’t get past the Super Over against Virat Kohli’s RCB. Following this, MI recorded five consecutive victories on the spin to turn their fortune this season. Like they always do, the Rohit Sharma-led side hit the form third week onwards and are the perennial slow starters in the IPL.

Their winning run was put to an end by KXIP but the match went on till the second Super Over which was the first time in the history of IPL. MI followed it up with a ten-wicket win over CSK but were defeated by RR. However, they came back strongly against RCB in the last game to secure their eighth victory. Mumbai Indians, as a team, are at their best when their bowling fires on all cylinders. Traditionally, Mumbai Indians have had multiple match-winners in their bowling line-up. This year, the likes of Jasprit Bumrah, Trent Boult, and James Pattinson, all have been on top of their form and even the best batters in business find them difficult to get away with.

They now have two fixtures left in the league stage. They play against Delhi Capitals in Dubai followed by SRH in Sharjah.

There is every possibility that Mumbai will retain their coveted crown, it is upto the rest of the pack if they want to make a match of it.