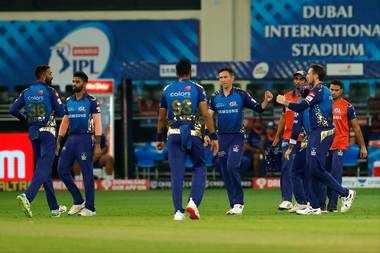 They’re the defending champions, they’re the most successful team in the history of the tournament, and they’re looking good this time around as well. Mumbai Indians (MI) are known as the perennial slow-starters of the Indian Premier League (IPL). But come to the business end of the tournament, the MI juggernaut is at full steam.

On Sunday, the Rohit Sharma-led outfit steamrolled fellow favourites Delhi Capitals in a clash of table-toppers. The convincing win propelled Mumbai Indians to the summit of the IPL table, while the Delhi Capitals were condemned to their second defeat of the season.

The Shreyas Iyer-led franchise were comfortably outplayed, and despite their mistakes, however, DC managed to take the game into the final over, which showed how dangerous they can be as a unit. But the win again shows why Mumbai Indians are favourites to retain their IPL crown for their fifth title in Dubai this year.

On a day when skipper Rohit Sharma and all-rounder duo Hardik Pandya – Kieron Pollard managed just 16 runs off 28 balls and Bumrah went wicketless – albeit in four excellent overs – the Mumbai Indians still reeled in a victory against fellow table-toppers Delhi Capitals without any jangling of nerves.

This talks volumes about the quality that seeps through the ranks of MI. In a team of superstars, the batting heroics of Quinton de Kock and Suryakumar Yadav may occasionally go under the radar. But as they’ve shown in the last three games, flying under the radar does not diminish the devastating effect they can have.

There are one or two key issues though, that coach Mahela Jayawardene would be keen to address as the action swiftly moves to playoffs. Skipper Rohit Sharma has had a mix-bag as far as his batting form is concerned. A couple of fifties early on in the tournament temporarily allayed some concerns, but with the ability, he has much more is expected from the laid-back skipper.

Birthday boy Hardik Pandya too- didn’t have much to do in the field apart from an overthrow that angered his elder brother. The all-rounder hasn’t bowled in IPL 2020 so far, with his recent back injury.

An IPL is a long tournament, with months of planning and preparation going into it. A team of backroom staff works overnight to get the planning process with pinpoint accuracy, which later the players try and replicate on-field with the help of management.
Working together as a unit is Mumbai’s strength and they do it by focusing on smaller aspects.

For example, last night after the dismissal of Rohit Sharma, Quinton De Kock sensed the wicket presented an opportunity for Delhi to crawl back into the contest, so in the next over, he smashed two sixes to ensure the pressure was off the new batsman Suryakumar Yadav. It was outstanding game management and teamwork.

Similarly, at the fall of De Kock’s wicket, a small window of opportunity had opened up for Delhi and Shreyas Iyer turned to his strike bowler Kagiso Rabada. But instead of trying anything outrageous, Yadav went into a shell and just picked off a couple of singles. Yadav knew his team couldn’t afford to lose back to back wickets. He had the belief of scoring runs in the upcoming overs. To state the facts, Mumbai scored 21 of the next two overs with ease. This was the attention to detail. These are things that cannot be taught but are learnt on the job.

MI have benefited greatly from Rohit Sharma’s captaincy acumen and his personal growth as a player at the international stage. The Mumbaikar’s rise in stature as a white-ball cricketer coincided with the franchise’s growing success and they’ve established themselves as IPL heavyweights after struggling to find their feet in the first couple of seasons. He has been in charge of the team since 2013 nad has four IPL titles to show against his name.

With more or less a similar squad, they topped the table in the group stage last year before going on to bag the title, and this year’s squad also looks capable of competing consistently. The likes of Suryakumar Yadav, Ishan Kishan, Anmolpreet Singh and Rahul Chahar are proven performers and add depth to the squad. In addition, the presence of a number of all-rounders lends flexibility to Rohit. With the Pandya brothers and Pollard in the XI, Mumbai can shuffle their batting order according to each match situation.

Mumbai Indians function like a well-oiled machine. With a great set of coaching team and players in place, expectations are always on the higher side. Don’t be surprised if the Mumbai Indians are contesting the IPL final to be played on November 8 and defend their crown. Rohit Sharma and his men are battle-ready!