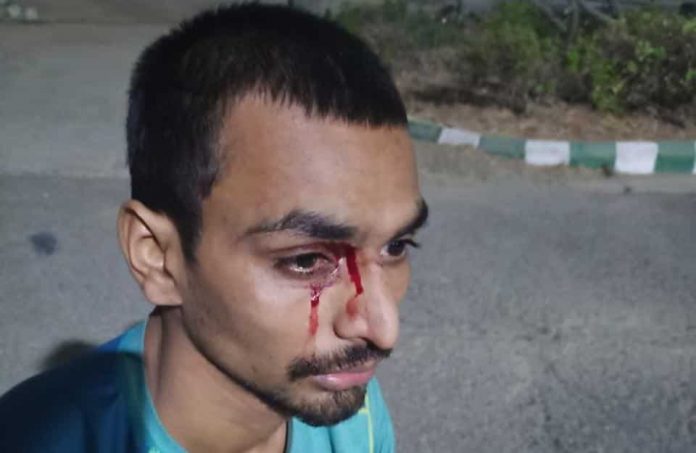 An Indian pole vaulter, Anuj was allegedly assaulted by his coach at the national pole vault academy running from Jawaharlal Nehru Stadium on Tuesday late evening.

Anuj alleges the coach for the injuries The incident was reported to have taken place after the clock hit 10 PM on Tuesday. It happened at the Jawaharlal Nehru Stadium.

The alleged is the assistant coach of the training facility named Devender Kumar. He had turned up to pay back the amount of Rs. 25,000 to Anuj, which he had previously borrowed.

The International-level pole vaulter revealed that Kumar then threatened him to give him in writing that he will train under him and not any other coach. But, when the 25-year-old denied, the coach started a brutal attack on Anuj.

He alleged, “After giving the money, he (coach) asked me to give in writing that I’ll only train under him (Devender) and not the other coach of the academy (PC Tyagi). When I refused, he starting beating me.”

The youngster had suffered deep cut above his right eyebrow and the coach had left the scene. He was then immediately hospitalised at Safdarjung Hospital.

The injury led to Anuj receiving as many as seven stitches and he was discharged late at midnight.

As the reports say, a complaint at the local Lodhi Road Police Station has been lodged on the following day of the incident.

Devendra Kumar disproves the allegations made against him

Devendra Kumar, the coach who has been accused denied of the actions by him and tried to turn the tables as he was defensive of himself.

He said,  “I was having a friendly chat with him inside my car and without provocation he hit me.”

The incident certainly raises questions about the security of the athletes staying at the JLN Stadium. The  Sunita Baral, stadium’s administrator said that she was not aware of the incident and responded, “will probe and let you know.”

The JLN stadium based academy is under the Sports Authority of India academy(SAI) training centre in Sonepat, Haryana. Anuj was shifted to the facility on November 19.

He was undergoing quarantine at the academy. The 25-year-old was set to start training from this week but had to experience a horrific incident.