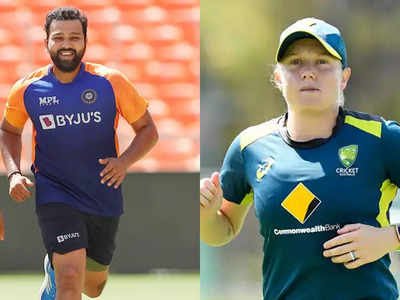 Australia’s wicketkeeper and batswoman Alyssa Healy considers India’s Rohit Sharma to be one of the best opening batsmen. She looks to him for inspiration and hopes to replicate Rohit’s success in the multi-format game.

“I look at the modern Test game and see how it has changed quite a lot. I look at someone like Rohit Sharma who is one of the most devasting white-ball batters in the world and yet he’s a really successful opener in Test cricket,”

“So for me, I said look at somebody likr him and think about how he translates those skills across all formats, could I potentially replicate that somehow?” she told Times Of India

Rohit, the limited-overs vice-captain, is known for his excellent batting skills in both the red-ball format and the white ball format.

The Australian women team is gearing up for a multi-format match against India. The entire series will include a day-night Test, three ODIs, and three T20s. The event will commence from September 21 and will conclude on October 3.

Healy, has played mostly Tests so far. To be more precise, Healy has played four Test matches. She is not feeling too confident as she says the pink ball fixture will prove to be “tricky” for her. She is determined to play it like an ODI and not think too much about it.

‘It’s a tricky one because I have only played four Tests so I wouldn’t say I’m overly comfortable with how to play or how to approach a Test,’

‘From my point of view, I don’t think it’s going to change too much from my ODI batting. I think the ability to give yourself more time is such a blessing,’ she told Fox Sports

About the upcoming match against India, Healy said that the unpredictable nature of the team makes them a threat. Last time senior spinner, Poonam Yadav made an impression on the Australian team when she turned the tables around.

This year, the Indian audience will witness many new players on the field. Healy feels threatened by these unknown players.