When Ajinkya Rahane took charge it was hardly the situation to be captain. After a morale-shattering loss in the first Test in Adelaide in early December, skipper Virat Kohli handed over the reins to Rahane with the team in the worst possible condition. What transpired over the next three Tests speaks volumes about the man and the way he has handled leadership. With grit, determination as core values, the much-depleted Indian side won two of the next three Tests to not only turn the tide in the most dramatic fashion but also to fashion a 2-1 series win against all odds.

This will be considered in line with a 2-1 home win against the same opposition in 2001. There have been few and far series results worth remembering, but this will rank very high for India-and the man at the centre of it is no doubt Ajinkya Rahane.

Rahane has been the deputy to Kohli for a long time. The middle-order batsman has led the Indian cricket team in two Test matches. Incidentally, the 32-year-old made his Test captaincy debut against Australia in 2017.

So when India arrived in Melbourne, they were carrying a big scar of their performance in Adelaide. Known for his calm and calculated demeanour, Ajinkya Rahane showed attacking intent in Melbourne with the team desperately in need of some positivity. He scored a magnificent century, which not only lifted the spirits of a depleted unit but also enabled India to make a statement with a stirring series-levelling win in the Boxing Day Test.

One of the things that stood out throughout the series was Ajinkya Rahane’s captaincy. From the way he used Ravichandran Ashwin, Ravindra Jadeja and Washington Sundar to calling a team huddle, on-field calmness and longish spells for bowlers, his leadership style rubbed off beautifully for the Indian team. 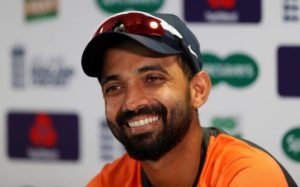 It was in this light that Rahane began the series, only to run Kohli out and wear the look of a man doomed to publicly atone for his sins. Come the second Test at Melbourne, and there was no hangover of Adelaide either in the field or with the bat.

It is a common saying that a captain in Test cricket is as good as his bowling attack. And Rahane had to do without his main bowlers throughout the series. India were already without Ishant Sharma and lost Mohammed Shami during the Adelaide Test. It was Umesh’s turn to succumb to injuries and he was ruled out after the Melbourne Test.

The Sydney Test saw no result but took crucial casualties in the form of Jasprit Bumrah, Ravichandran Ashwin and Hanuma Vihari. To operate with such a depleted, inexperienced and make the most of the limited resources is what great leaders do. That Ajinkya Rahane had Mohammed Siraj, T Natarajan, Navdeep Saini and Washington Sundar as his bowlers in Brisbane and still dismissed the Australians twice, talks volumes about the fighting spirit created in the dressing room and Rahane has a big role to play here.

The sample size is too small to make any sweeping judgements, but Indians fans will hope what was seen in Australia after the first Test — steely aggression that is different to Kohli’s heart-on-sleeve leadership — is more than just a one-off. The drastic transformation of the team was not by fluke. This amazing turnaround was under the leadership of a man who is humble by nature, quiet compared to Kohli and also someone who prefers not to be in the limelight.

No brashness or in-your-face kind of tactics, just calmness personified as he surveys the situation and assesses what has to be done.

Quite aptly, speaking after the win, Rahane was at loss of words as when he was asked what this victory means to the team and the country-his response was simple in praising the team effort and applauding the role played by the inexperienced bowling attack.

And watching the man at the helm of the turnaround lift the famous Border-Gavaskar Trophy was one of those emotional moments in the game that make it all the more worth watching.