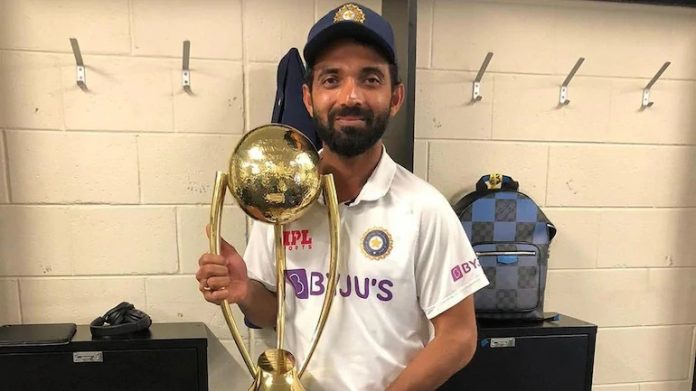 With India in trouble, he has always delivered, though there’s little that’s flamboyant about Ajinkya Rahane. With the team down in dumps after the annihilation of Adelaide and inspirational skipper Virat Kohli flying back home, India largely had the stand-in skipper to thank for their come-from-behind win on Australian shores.

He has managed to do the impossible, and Rahane has been hailed as India’s crisis man, but more than the accolades-does he deserve a fair shot at full-time Test captaincy?
The Mumbai middle-order batsman neither has the brilliance of Virat Kohli nor the tedious assurance of Cheteshwar Pujara, not to mention that he has fewer centuries and a lower average.

But he possesses something more important than that, never say die attitude.
From winning the Boxing Day Test to drawing an almost losing match at Sydney, Rahane’s tactical moves have made sure to keep India running in the game for the Border–Gavaskar Trophy.

Albeit, this is not the first time that Rahane has been called up to do the job, and the deputy has filled in Kohli’s shoes with more than equal aplomb.

Rahane exhibited those qualities in Dharamshala in 2017, when India defeated Australia in the final Test with the series on the line, and again during the Melbourne Test.
They both have different approaches towards captaincy, on-field decision making and demeanour is totally different.

Three years later, he faced similar calls with the team at its Nadir, but Rahane passed the test with flying colours and as a result, there are widespread calls for him to be named full-time Test team captain.

It was clear that Australia were under-prepared for what India threw at them. And that is where Rahane and the coaching staff warrant a lot of credit. After all, most of the teams can only dream of winning back-to-back series with an Australian side at its mercy, but when the chips were down-Rahane stood firm and countered the adversity in the best possible manner.

As captain, Rahane is a type Australia have rarely countered—quiet but aggressive. Wedded to the idea of needling the opposing captain to get under the tourists’ skin, Australia may not have much to work with for most of this series.

Rahane’s calm and composed leadership in India’s biggest overseas series win has opened up a debate but to disappoint the fans of the Test vice-captain, there is little chance of a permanent anointment for him in the immediate future. However more significantly, there could be a paradigm shift in how the leadership group in the Indian cricket team works when Kohli re-enters the dressing room after a month-long paternity break.

In India’s biggest overseas series win has opened up a debate but to disappoint the fans of the Test vice-captain, there is little chance of a permanent anointment for him in the immediate future. However more significantly, there could be a paradigm shift in how the leadership group in the Indian cricket team works when Kohli re-enters the dressing room after a month-long paternity break.

Kohli will be back as captain when the first Test against England begins in Chennai on February 5. But there have been calls for Rahane to stay on.

Rahane’s captaincy record against the Aussies is as impressive as it gets. He has got the better of Australia three times in four Tests, something that he can be immensely proud of. After a much-depleted squad almost performed the Houdini act down under, cricket fraternity across the globe were in awe of the way this young Indian team went about their job as nonchalantly as their captain.

Ajinkya Rahane defined the idea of a captain's innings at the MCG, winning our award for the Test batting performance of 2020 👏 #ESPNcricinfoAwards

There are many facets to captaincy and there’s no one single formula that works every time, especially in a long Test series.

And every time Rahane was called upon, he answered the calls with fortifying character, be it smashing a defining ton at the Melbourne Cricket Ground that set up an Indian win, or an impact cameo that asserted India’s intent to win on the fifth day at the Gabba.

A 1-1 scoreline would have allowed India to retain the Border-Gavaskar Trophy. But Rahane went after the Australian bowling, scoring 24 off 22 balls before getting out. Those 24 runs were not too many, but in the context-they amply spoke of India’s intentions to go for the win.

Now, after the Border-Gavaskar Trophy, however inexpressive he might be, Rahane’s voice will now be heard if he wants it to be heard. That has certainly changed.

With the murmurs of the captaincy calls, the BCCI moved swiftly after the win at Gabba to confirm the squad for the first two Tests against England with ‘C’ in front of Virat Kohli.
Despite achieving success in Australia, Rahane will be back to being Kohli’s deputy in the upcoming home series against England next month. But for now, Rahane just wants to “enjoy this win”.

There’s every possibility that Rahane may not get another shot of being at the helm, but he for sure has it in him to lead the team-if and when required!