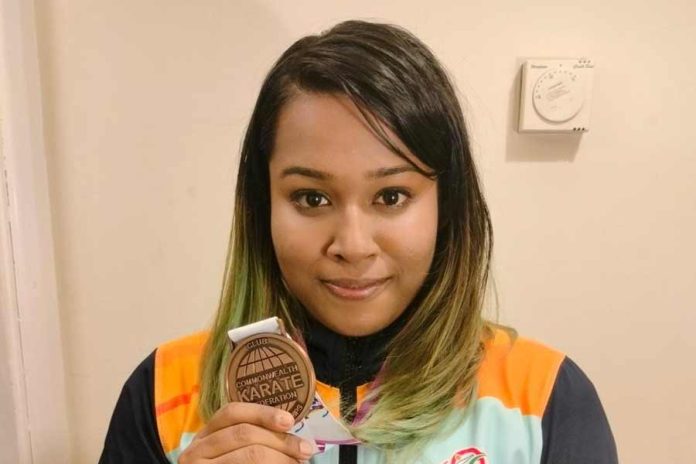 Indian karate prodigy Aishwarya Manna, who hails from Howrah, brightened the face of Bengal and the country in the 10th Commonwealth Karate Championships held in Birmingham after clinching bronze.

Aishwarya bagged the bronze medal after finishing third out of 128 contestants from 20 participating countries after overcoming tough competition from contestants from countries like Australia, New Zealand, Nigeria, and Canada in multiple rounds.

Hailing from the Dumurjala area of ​​Howrah district in West Bengal, Aishwarya returned from Britain yesterday to her proud family. Her father Chanchal Manna informed in a recent interview that Aishwarya started learning karate when she was in sixth grade and when Chief Minister Mamata Banerjee ordered schools to teach self-defense martial arts to girls following the Park Street gang-rape incident.

Since finding her love for Karate, Aishwarya’s skills were polished with better coaching. Two years back, she started training in Hyderabad two years ago and won two gold medals in state and national level competitions. The feat in Birmingham is her first medal in the under-21 age group competition at the international level.

However, Aishwarya feels that the desired gold did not come because there were some lacks in her training but she wants to reach her peak performance and target gold in the upcoming world championships in Jakarta.