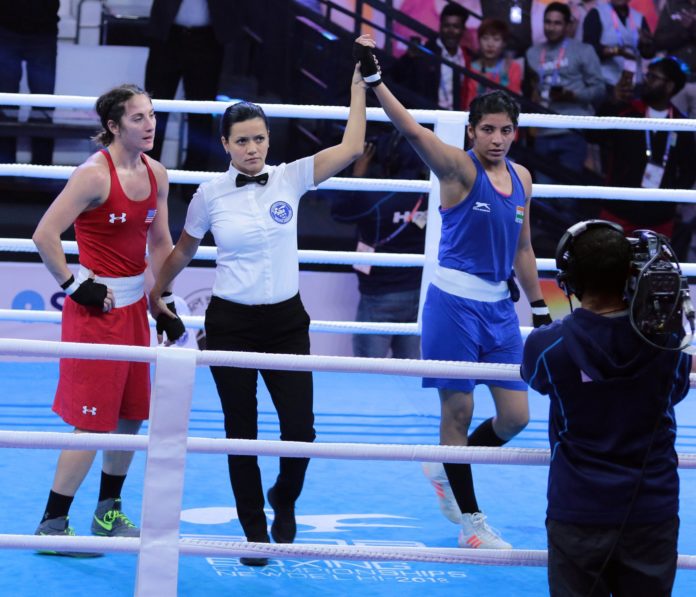 The Indian boxing contingent continued their winning run at the 2018 Women’s World Boxing Championships in New Delhi as Sonia, Simranjit Kaur, and Pinki Rani qualified for the pre-quarterfinals in their respective weight categories.

Sonia was the first one in action against Morocco’s Toujani Doaa in the 57kg category. Using her defensive abilities at the best, she won the game 5-0 unanimously. “My style is basically defensive and I stuck to it. My coaches told me to play from a distance, draw her in and punch,” said Sonia, who was competing in her first major international event.

Next up, it was Pinki Rani in the 51kg category. She eked out a 4-1 victory against Anush Gregoryan of Armenia. “This is my third World Championships and I have not won a medal yet. This time, I want to make my countrymen happy by winning a medal,” said the 2014 Commonwealth Games bronze medallist Pinki Rani.

Simranjit Kaur followed the suit as she pulled off a 4-1 win over USA’s Amelia Moor in the 64kg category. “It was a tough fight. After studying her in the first round, the coaches told me not to go very close. But in the third round, I went all out,” said Simranjeet whose father just passed away three months earlier.

Tomorrow, Mary Kom, Lovlina Borgohian, Saweety Boora, Bhagyabati Kachari, and Seema Poonia will be in action. They would be raring to continue India’s stupendous run.

The Sportsindiashow team wishes all the Indians at the AIBA Women’s World Boxing Championships in action tomorrow all the best.