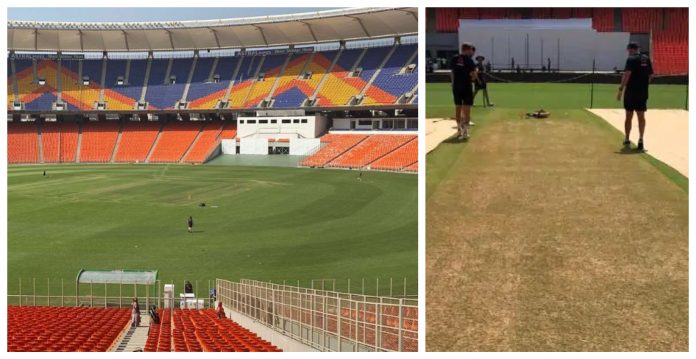 Expectations were dampened when the inaugural test match at the coveted refurbished stadium in Ahmedabad ended in a matter of two days. Despite the architectural brilliance, it was the 22-yeard strip that became the talk of the town due to the string of low scores. The venue has now escaped any potential sanction after being rated as ‘average’ by the ICC.

All four sessions of the test were wrapped up within two days after the batsmen failed to assess the pitch along with the threat of the pink ball.

While the action unfolded very quickly, the majority of dismissals were attributed to the straight deliveries. This led to major questions upon the skills of the batsmen, who failed to adapt.

Following the conclusion of the match, Virat Kohli also attributed the brisk nature of the test to the lack of application by the batsmen. Opposition skipper Joe Root, who had claimed a five-for in the match, was not in favour of the surface.

Root and coach Chris Silverstone had even approached the match referee and considered lodging a formal complaint as well.

The ratings for the other fixtures held at the new stadium were also released. The pitch for the fourth Test, which ended in three days,  was adjudged ‘good’ by the ICC while the surface used for the first T20 was rated ‘very good’.

As of now, the venue escaped the prospect of being hit with demerit points. The ICC rulebook states:

The Narendra Modi stadium will also host the rest of the T20 series, as well as the fixtures of IPL, including the knockouts and the final.

IPL set to bring back 10-team format from 2022, new teams to be auctioned in May