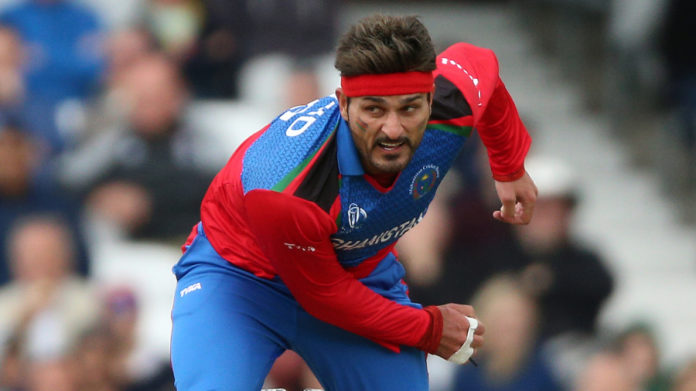 32-year-old Hamid Hassan is a part of the Afghanistan team which is currently playing the World Cup. But a couple of years back, and Hamid Hassan had already given up on his career. A few years ago, Hassan had met with a scary accident when he rammed into the sightscreen while fielding.

He was down with pain. The game was stopped and Hassan was carried away on a stretcher. But the pain was so much, that Hassan was crying all throughout that journey from ground to the hospital. The fastest bowler for Afghanistan, Hamid Hassan was away from the game for the last three years. However, it was Afghanistan’s qualification in the World Cup that dragged him out of his bed and onto the field.

While giving an interview, Hamid Hassan revisited his career. Right from his younger days where he idealised Andrew Flintoff and Shoaib Akhtar to a match where he bowled 22 overs on the trot.

Hamid remembers of him and Nabi getting selected for the MCC. This was an opportunity for the pacer to play on greener pitches. Hamid could not believe his luck then. And now, 12 years later too it is very difficult for Hamid to comprehend the progress. According to Hamid, all the countries who play this sport today, have made progress, but none of them made it at Afghanistan’s pace. Whenever Hamid and Nabi recall these days, they feel extremely proud of their nation.

The Afghanistan pacer ended the interview with his future plans. Next two years of T20 cricket and then call it quits is what Hassan is thinking of.

However, talking about the team’s position at the moment, Afghanistan is having a rough World Cup. They are yet to win a match and are already out of contention for the top 4.