The transition of Ronda Rousey from the world of MMA to Pro-wrestling is a rare example of successful entry of a superstar in another field into the world of kayfabe. Her debut at Royal Rumble brought both joy and criticism, but it was her match at Wrestlemania that confirmed her immediate foothold on the art. Rousey went on to have a triumphant run at WWE where she expectedly became the Raw Women’s Champion, before bearing the distinction of being one of the three women to headline Wrestlemania for the first time. 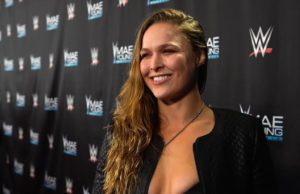 After Wrestlemania, Rousey took a hiatus from the industry, and it now seems that the holiday will be permanent. In a recent episode of Total Divas, Rousey hinted at retirement, as she talked about the tension in managing time between her WWE family and her personal household. Rousey followed it up with a tweet where she declared that Wrestlemania 35 was the “climax” of her career and at the ‘Show of Shows’, she was ready to “go out in blazing glory.”

The ever passionate pro-wrestling fans have requested Rousey to reconsider her decision, as they feel her career in the industry they love should be longer and grander. As a testament to her achievements, let’s have one more look at her huge debut at Royal Rumble.

Wrestler Ravinder Kumar ends his campaign at the World Championship

Indian Wrestling to get financial aid from Uttar Pradesh Govt. until 2032 Olympics