The Indian Premier League (IPL) is about to begin in 4 days. Hence, all IPL teams have begun the preparations. Some teams like to do different match scenarios while practicing. While others play a full fledged practice game. Recently, the Royal Challengers Bangalore conducted an intra-squad match where AB de Villiers stole the show. 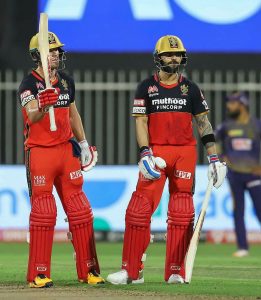 The squad was divided into two teams, RCB A and RCB B. The former team was captained by Harshal Patel and the latter was led by Devdutt Padikal. However, the likes of Virat Kohli, Mohammed Siraj and Dan Christian did not participate in the match due to quarantine protocols.

Batting first, Patel’s RCB A posted a mammoth total of 212 on the back of a scintillating century from AB de Villiers. The modern day legend scored 104 of just 46 balls. This included 7 fours and 10 sixes. Mohammad Azharudden also contributed some useful runs as he scored 66 runs off 43 balls.

However, the Padikkal-led side chased the massive score on the last ball to win the game by 7 wickets. Skipper Devdutt Padikal and KS Bharat provided a great start to the team. Bharat went on to score a match-winning 95 of just 47 balls. RCB’s official Instagram page shared the highlights of the game.

We had fun out there: AB de Villiers on his innings AB de Villiers would have rarely played a game of cricket since the first leg of IPL. As he has retired from international cricket, AB wouldn’t be training regularly either. Hence, his knock in the intra-squad match holds a lot of value. After his innings he agreed that he had fun in the middle and was pleased with his efforts.

“When we arrived and I got off the bus, I thought it’s crazy that we’re trying to play a cricket game in the middle of the day. Luckily the breeze came up, I told Azharudeen that it’s much better now and the pitch will get flatter. We had fun out there, I’m pleased with the runs on the board. It was very stretchy for the first 20 balls out there,” said De Villiers after scoring a majestic hundred.