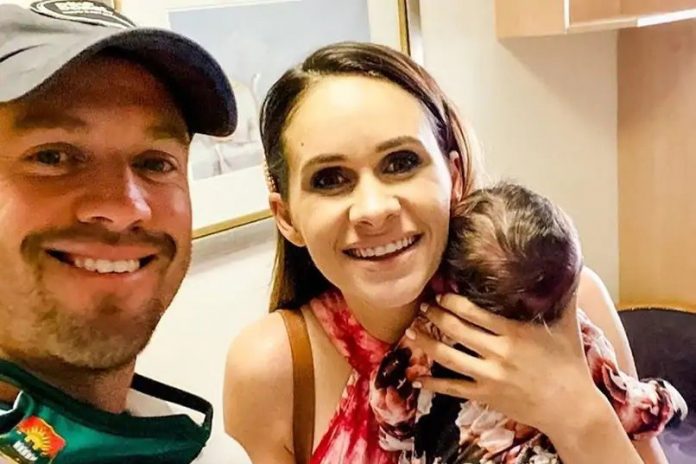 A new member has been added to the family of the former South Africa captain AB de Villiers and his wife Danielle as they have welcomed their third child – a daughter- on Thursday. They have tied the knot in 2013 and they have already two sons – Abraham de Villiers and John Richard de Villiers.

The batting superstar recently took to his official Instagram account and shared the good news to his fans and followers. He shared an adorable picture of himself, his wife and the newborn baby where he has also revealed the name of his daughter – Yente de Villiers.

“On 11-11-2020, we welcomed a beautiful baby girl into the world🎀,” wrote AB de Villiers.
“Yente de Villiers, you are the perfect addition to our family and such a blessing. We are grateful beyond measure for YOU!” he shared with this caption

The swashbuckling batsman AB de Villiers has recently featured in the 2020 edition of Indian Premier League (IPL) where he played for Virat Kohli led Royal Challengers Bangalore (RCB). The South African star has been in a sublime form and did wonder with the bat and finished IPL 2020 as RCB’s third-highest run-getter as well. His stunning show helped his side, RCB reaching the playoffs for the first time since 2016.

He amassed 454 runs in 15 games which also included five fifties before RCB got out of the tournament after the loss to Sunrisers Hyderabad in the Eliminator. With this, their hope of winning the maiden title was lost too once again.

On the other hand, AB de Villiers’ good friend as well as IPL teammate Virat Kohli too is on the verge of becoming a father for the first time in January. His wife, the famous actor Anushka Sharma is due to give birth to their first child in early January. Meanwhile, The Indian Team are in Sydney for the upcoming tour but the captain’s paternity leave has already been accepted by the BCCI who will play the limited-overs series and the first Test before leaving for the country and miss the rest three of the four-match Test series against Australia.