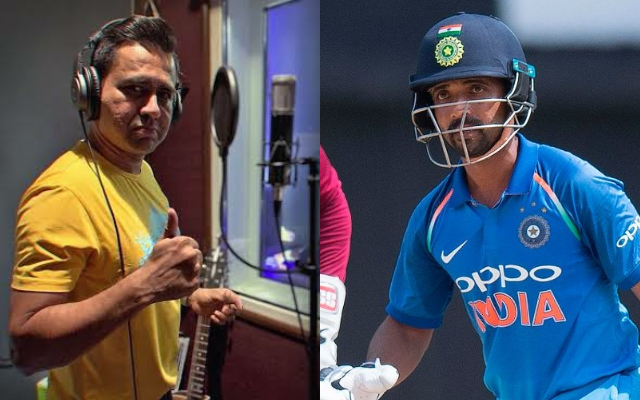 Ajinkya Rahane hasn’t enjoyed great form since his heroics at the Melbourne Cricket Ground last year in Australia. Since then he has failed to bail India out of tough situations on plenty of occasions. Now, former Indian opener turned cricket expert, Aakash Chopra feels that Rahane may find it tough to get a spot in the playing XI Not long ago, Rahane was captaining the first test against New Zealand. Then he was ruled out of the second test due to an injury. After the series, Rahane was dropped as India’s vice-captain in the test setup. Rohit Sharma was appointed as the deputy to Kohli in tests.

However, a hamstring injury ruled Rohit out of the test series. But selectors did not go back to Rahane. Instead, they selected KL Rahul as the replacement for Rohit for the position of vice-captain. In a video shared by Koo, Chopra was seen stating that Rahane may find it difficult to get selected in the playing XI after getting dropped as the vice-captain of the side. His average in the 16 Test matches that he has played in the last two years is only 24.39 with only one hundred – in Melbourne against Australia – and two fifties.

“KL Rahul has been appointed as India’s Test vice-captain (for the South Africa series as Rohit Sharma is injured. Rahul Dravid is the coach, Rohit is the captain of white-ball formats. I think Rahul may be appointed vice-captain in ODIs also.

Ajinkya Rahane might find it difficult to find a place in the XI. He was captain just a couple of Test matches ago but right now he’s not even the vice-captain. Things are changing in Indian cricket,” Chopra said in a video shared on Koo.

What do you think?

However, the likes of Kohli and Rahul Dravid have always backed Rahane regardless of what the outside noise says. It will be interesting to see if the Kohli-Dravid-led management will trust the out of form but experienced Rahane or a new face in Shreyas Iyer and Vihari.

• Ajinkya Rahane was removed from the vice-captaincy role of the Indian test side.

• Aakash Chopra feels Rahane will be unlikely to be included in the playing XI for the tests against South Africa.

ALSO READ: I like Virat Kohli’s attitude but he fights a lot: Sourav Ganguly