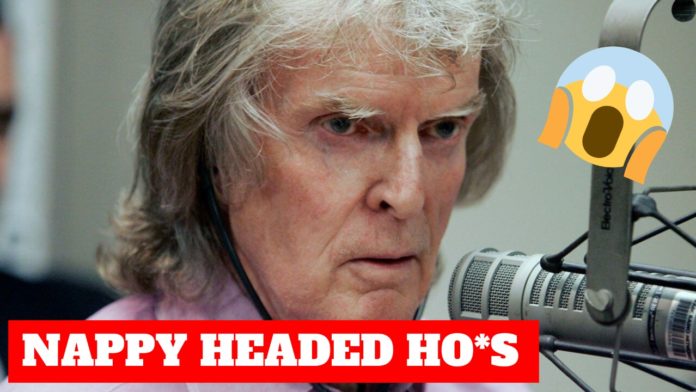 Fans around the world invest so much emotion, love, passion, and time into sports because it’s a means for them to let off steam and to many, it serves as a distraction to all the negatives that are happening around the world.

It takes people’s minds off of other problems in life and for that specific moment no matter what good or bad is happening in their life, they can simply let go all of their thoughts and enjoy themselves.

However, sports isn’t perfect, it has also been gripped by corruption, cheating, racism etc. The most important and common issue that has gripped the sporting world is racism. While it’s certainly not a new phenomenon as there have been numerous incidents on racism in sports, sometimes by fans, sometimes by athletes and sometimes by broadcasters.

In this case, we take a look back at 5 times sports commentators crossed the line and were punished for it.

Jones called Amla a ‘terrorist’ after wrongly assuming that the network had switched to commercial break. He said, “The terrorist gets another wicket”. Dean Jones later apologised for his comments.

“I have no end of respect for the Muslim faith – that’s why I’m so sorry at making such a stupid comment,” he said. “It does not represent who I am, how I think or what I believe. I will be the first person to apologise to Hashim as soon as I get the chance, and I will assure him that prejudice against anybody, on any basis, is unacceptable and not something I will ever condone.” (H/T – ESPNcricinfo)

Tim Ryan who is a radio host for the National Football League (NFL) team San Francisco 49ers was suspended for a game after he made comments about Lamar Jackson, who plays in the quarterback position for Baltimore Ravens. He made those comments last month.

Tim Ryan said, “[Lamar Jackson] was really good at that fake, Lamar Jackson, but when you consider his dark skin colour with a dark football with a dark uniform, you could not see that thing.

Snippet of Tim Ryan’s comments RE: Lamar Jackson’s “dark skin with a dark football with a dark uniform… you could not see that thing” via KNBR. He has since been suspended by the team pic.twitter.com/vpRI3veoXK

“I mean you literally could not see when he was in and out of the mesh point and if you’re a half step slow on him in terms of your vision forget about it, he’s out of the gate.”

The fans were outraged and Tim Ryan had to immediately issue a statement and apologise to the fans.

“I regret my choice of words in trying to describe the conditions of the game. Lamar Jackson is an MVP-caliber player and I respect him greatly. I want to sincerely apologize to him and anyone else I offended,” Ryan said in his apology letter.

Italian sports commentator Luciani Passirani was fired by TopCalcio24 after he made shocking racist comments about Inter-Milan striker Romelo Lukaku.

Luciano said ‘[Lukaku] will kill you if you go one on one against him’ and then said that the only way to stop him was to throw “10 bananas to eat,” as per a report by Marcus Christenson of the Irish Times:

“Lukaku is one of the best signings that Inter could have made. I don’t see another player like him on any other team in Italy. He is one of the strongest, I like him a lot because he has that strength: he is the twin of (Duvan) Zapata at Atalanta.

“They have something extra that the rest don’t have, and then they score the goals and drag your team forward. This guy kills you in the one-on-ones if you try to challenge him you wind up on the floor. Either you have 10 bananas to eat, that you give to him, or…”

Luciano was met with widespread criticism and he was fired from the show. Fabio Ravezzani who is the broadcaster’s director criticised Luciano for his racist comments.

However, Luciano later said in an interview with Telelombardia with that he was not a racist.

“I am 80 years old. I have been in the world of football for 40 years, I have never received a disqualification for behaviour in any of the roles I have held, but I accept the decision made against me.

“I would like not to pass for a racist. My partner who has lived with me for 17 years is black, I have two little black granddaughters, my son’s daughters. I am not a racist and I believe I am an educated person in every respect. In my career, I met so many black players and I never had any problems.” (H/T – The Independent)

Kelly Tilghman who is an anchor for Gold Channel was suspended by the network back in January of 2008.

Tilghman said during the broadcast that up and coming young players should ‘lynch Tiger Woods in the back alley’. Tilghman had to apologise for her statements later.

“On Friday during our golf broadcast, Nick Faldo and I were discussing Tiger’s dominance in the golf world and I used some poorly chosen words,” Tilghman said in a statement. “I have known Tiger for 12 years and I have apologized directly to him. I also apologize to our viewers who may have been offended by my comments.” (H/T – ESPN)

There’s a dark historical significance between POC and the world ‘Lynch’ in the United States.

“Historians broadly agree that lynchings were a method of social and racial control meant to terrorize black Americans into submission, and into an inferior racial caste position. They became widely practised in the US south from roughly 1877, the end of post-civil war reconstruction, through 1950,” as per a report from The Guardian.

Don Imus was one of the most popular radio talk show host in the United States. Imus became popular through his morning show called “Imus in the Morning”. The show aired for nearly fifty years.

The most controversial part of his career came in 2008 when he called Rutgers University women’s basketball team as “nappy headed hos” and “jigaboos.”

I’m sure there are people in his life who mourn his loss but I’m not one of them. pic.twitter.com/Vj7AYUJJMa

Following these comments from Imus, numerous advertisers pulled out from his show and a week later he was fired by CBS.

He retired from broadcasting in 2018 and in an interview with CBS said  “[the incident]did change my feelings about making fun of some people who didn’t deserve to be made fun of and didn’t have a mechanism to defend themselves“.

Below we have linked a recent article from the MMA India Show, which shows the recent case of racism from an MMA analyst working for Sony Sports Network, where he used the word ‘dehat’ for fellow Indians.

Ahead of the IPL 2021, Virat Kohli feels Wanindu Hasaranga and Dushmantha Chameera have brought new dimensions to the team