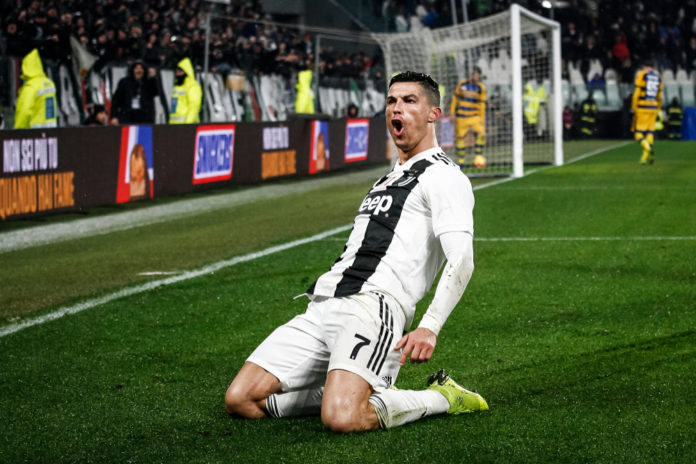 Portuguese legend Cristiano Ronaldo turns 35 very soon and you might think that his age has finally caught up with him. But, you’re absolutely incorrect. The man-machine hasn’t stopped being himself and is still as dynamic, graceful and gifted as ever. Arguably one of greatest of all time, Ronaldo continues to prove himself why he is adored by millions every-time he graces the pitch.

However, by his astronomically high standards, 2019 wasn’t a great year. Even though he enjoyed his fair share of success with both club and country, CR7 remains hungry for more and we can’t come up with any more superlatives to describe him. Thus, we simply stopped trying. What we can do is give you a recap on some of his best moment of the year. Here are the 5 greatest thing Cristiano Ronaldo accomplished in 2019:

Ronaldo’s first full season with the Bianconeris helped them register their record 8th consecutive Serie A title and Cristiano himself in the process, became the first player ever to win the Premier League, La Liga and Serie A. The Portugal captain won three league titles in England with Manchester United (2006/07 to 2008-09), two Spanish top-flight titles with Real Madrid (2011-12 and 2016-17), before eventually lifting his first Serie A with the Italian giants this summer.

Cristiano Ronaldo is a champion 🏆 pic.twitter.com/5YoSldgg8m

2: Goals in 9 consecutive Serie A away matches

It took just four games to open his Serie A account for Juventus, but it was worth the wait. Ronaldo scored the next 9 goals in 10 games as he equalled the club record of the fastest player to score 10 goals in the Italian league. The last person to do so was the legendary John Charles from Wales, who achieved this feat way back in 1957-58.

Even though the Portuguese maestro didn’t score a single hat-trick in his first Serie A campaign, he managed to score in nine successive away games and equalled Giuseppe Signori’s Serie A record set many decades ago. Ronaldo would ultimately go on to finish the season with 21 Serie A goals. Clearly, he came, he saw, he conquered!

During a Euro 2020 qualifiers game against Lithuania in September, Ronaldo netted four times and went past Robbie Keane (23) for the most goals in Euro qualifying history. The captain scored in six back-to-back games, as Portugal looks well set to defend their title at the European Championship next summer. Young Joao Felix might be the apparent heir but Ronaldo remains the one who makes Portugal tick.

It was a special feeling to receive the 700 goals’ shirt in our stadium by our President. Glad to score again and secure a difficult but well deserved victory.👍🏽💪🏽 #finoallafine #forzajuve

In October, Ronaldo scored his 700th career goal for club and country. Yes. 700th. Although his team suffered a 2-1 defeat to Ukraine, Ronaldo’s penalty took his tally to 700 goals in 974 senior appearances. A milestone which is only shared by a few other players including Pele, Gerd Muller and Romario. Quite an esteemed company we reckon.

Since this achievement, he has added a few more goals to his name, but reaching the 700th mark will always remain as one of the most greatest moments in his glorious career.

On November 17, Ronaldo scored his 99th international goal in a 2-0 victory over Luxembourg and strengthened his position as Europe’s all-time leading international marksman. The Portuguese now has 15 more goals than second-placed Ferenc Puskás of Hungary from the Mighty Magyars era.

While Iran’s Ali Daei currently sits on 109 goals, it’s just a matter of time before Ronaldo surpasses him.

He scored more Portugal goals this year than any other year 🤯 pic.twitter.com/RqDa2AXNjL

Yes, it’s true that CR7 did not finish 2019 just the way he had hoped; after all he finished third in all the big three awards of football (Ballon d’Or, FIFA’s ‘The Best’ and UEFA’s Men’s Player of the Year) this year. But given his past record, he might just clinch all the honours there are to claim, next year. Watch out 2020!