Just like plenty of other sports, arm-wrestling has also been gaining a lot of popularity lately. In India as well, while cricket and even football to an extent have garnered all the mainstream spotlight, other sports like MMA, Boxing and now even arm-wrestling have begun catching up to them. Thus, to help in further increasing the popularity and accustom people with the sport of arm-wrestling, the Chattisgarh Pradesh Arm Wrestling Association has taken the onus of organizing the 43rd Junior, Senior, Disabled and Master – Men and Women’s National Arm Wrestling Championship.

The National Arm Wrestling Championship began today on the 21st of June and the tournament will continue to go on till the 23rd of June in the beautiful city of Bhilai, Chattisgarh at Nehru House of Culture, Sector 1. 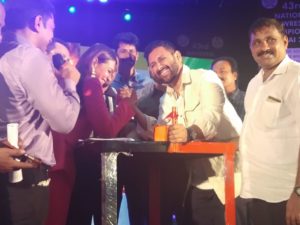 While the entire tournament is being organized by the Chhattisgarh Pradesh Arm Wrestling Association, it would not have been possible without the massive joint support of Bhilai Steel Plant and of the Indian Arm Wrestling Federation. To make the event possible, special credit has to go to the Governing Body of the IAF, who have all worked tirelessly to make it a huge success. Some of the main members of the IAF’s Governing Body who worked day-and-night to successfully organize such a massive tournament are:

Around 750 athletes have registered to compete in the tournament from over 22 states. The matches will be held between 9 AM to 10 PM every day. All athletes and their coaches have also been provided with free meals, local transportation services, accommodation, traveling allowance, trophies, medals, and certificates.

The official inauguration ceremony of the event was held today from 10 AM onwards where the Chief Guests were Bollywood celebrities, Founders of Swen Entertainment, and one of B-Town’s favorite power couples, Preeti Jhangiani, and Parvin Dabas. 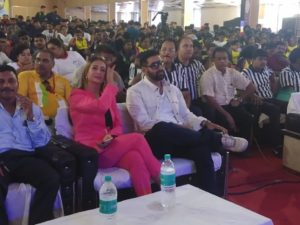 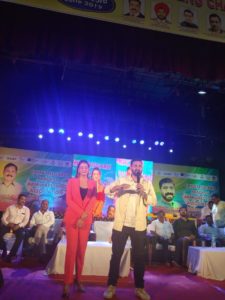 Preeti Jhangiani inaugurated the Indian Arm Wrestling National Championships by lighting the ceremonial lamp and later Parvin Dabas addressed the ceremony and further pumped up and motivated the athletes. Together they wished the arm wrestlers all the best and they also hoped that may the best man and woman win. 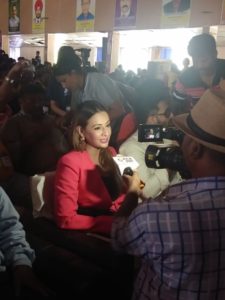 The arm-wrestlers present for the opening ceremony were filled with great excitement and euphoria by the presence of Parvin and Preeti.