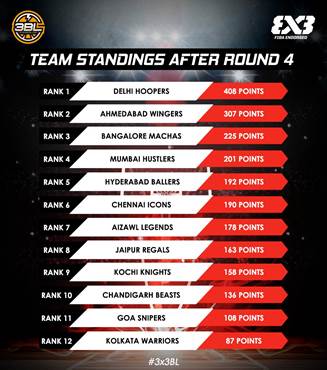 After a sensational fourth round in Chennai, 3×3 Pro Basketball League (3BL) moves to Bangalore on 11th and 12th August 2018 at Phoenix Marketcity. The surprising and eye-catching victory of Bangalore Machas, to end the three Round reign of the Delhi Hoopers, in Chennai increases the stakes in the league again as the competition for the leading teams increases.

3BL has been a huge success so far and has provided incredible opportunities to Indian basketball players. As the inaugural season is approaching its ending, the leading teams face tougher competition, as the prize money and a FIBA 3×3 World Tour Hyderabad spot comes within arm’s reach. The current standings have Delhi Hoopers in the first place, followed by Ahmedabad Wingers and Bangalore Machas. Chennai Round MVP Timajh Parker-Rivera and Chethan Suresh created a powerful inside-outside duo against Delhi Hoopers in the final match of the Chennai round and increased their chances of emerging on the top in the inaugural season.

The 3×3 Basketball League (3BL) franchise Delhi Hoopers will participate in the FIBA 3×3 World Tour Masters in the Japanese city of Utsunomiya. They qualified after emerging as champions in the third round of the only FIBA-recognized league in India.

3×3 basketball has been recognized as an Olympic sport and will be introduced at the 2020 Tokyo Olympics. The interest and excitement for the inaugural season as well as for 3×3 basketball overall has surged considerably in India since the inception of 3BL.

Rohit Bakshi, League Commissioner, 3BL, said, “It’s hard to fathom the constant support that 3BL’s first season in India has received. Bangalore Machas have set a benchmark when it comes to a proficient gameplay and a sudden climb through the team standings. We are very excited for the upcoming 5th round and are looking forward to witness a bright introduction and passion for 3×3 basketball in India.”

Yoshiya Kato, Chairman, 3BL said, “The success of 3×3 Pro Basketball league’s first ever season in India is the result of the constant engagement of fans and supporters. 3×3 basketball is a thoroughly entertaining sport and is equally challenging to satisfy the most passionate basketball players.”

Gajendra Singh Rathore, Senior Centre Director, Phoenix Marketcity, Bangalore said, “We are looking forward to hosting the fifth round of the 3×3 Pro Basketball League at Phoenix Marketcity Bangalore. At Phoenix we believe in variety and diversification and hence this time we have forayed into the field of sports and basketball is becoming more and more popular by the day among the youth in the city. We would like to wish all the players the best of luck!”