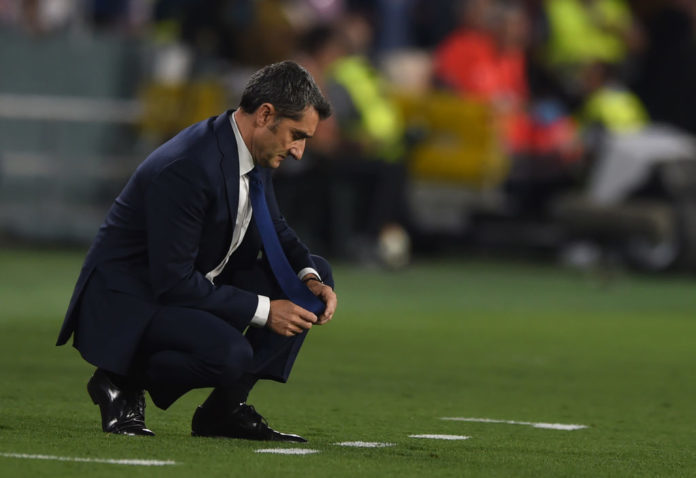 A decade ago, the Camp Nou saw Pep Guardiola drive his boyhood club to two Champions League trophies in three years with a string of players from La Masia. But unfortunately, nothing is immortal and those golden days were over before long. After Pep left the club in 2012, the board members were in a dire situation; should they go for big names to succeed him or should they find someone who can fit in easily with the style Barça plays. The board chose the latter and Tito Vilanova, Tata Martino, Luis Enrique and Ernesto Valverde was chosen since then; all just to answer the simple question, “Why aren’t Barcelona playing like they used to?”

The two previous seasons under Valverde’s reign, saw Barça, bottle crucial Champions League games away from home. To deal with those crises the club bought French striker Antoine Griezmann to sharpen the attack and Frenkie de Jong to orchestrate the midfield along with Arthur and Ivan Rakitic. But for the time being, the manager has angered the fans with a poor start to the season with 4 losses already. After salvaging a 0-0 draw against Slavia Prague at home in the Champions League, life’s getting hard for Ernesto Valverde.

While some of the board members are on Valverde’s side, reports claim, that several other members are quite concerned with how things are going and Valverde can be shown the door soon if results do not take off . Club president Josep Maria Bartomeu however, has been backing Valverde since last season, and remains rigid on his no “rash decisions,” stance.

Even, the atmosphere inside the dressing room is said to have soured as well, with a lot of muscular injuries, questions have been raised about of the technical staffs. But most importantly, there are serious doubts regarding tactical choices Mundo Deportivo claim.

Valverde however, responded by saying all criticisms of the team should be done in private. But the Barça boss is unhappy with his team’s performances and must find a solution before things become any worse. Right now, the former Barça  player has three big issues to resolve.

Even though Barça have a world-class shot-stopper at their disposal, the defenders can’t press back as a unit and opponents are reaching Barça’s 6-yard box without any problems. Due to this lack of organisation and the failed press, it creates a lot of space for the opposition to exploit.

There’s also problem with the defensive pairing. Gerard Pique and Clement Lenglet have played all four matches in Europe while Samuel Umtiti appeared just twice the whole season same as Jean-Claire Todibo, whilst Ronald Araujo from Barça B was sent off not long into his debut. As for the full backs, Sergi Roberto is now in midfield thus Nelson Semedo and Jordi Alba have been handed more game-time  and newcomer Junior Firpo has been handed only a few minutes so far despite his wonderful display against Getafe. Clearly, there’s a lack of confidence between the coach and his players.

Yes, Barça aren’t the same anymore, they have lost their rhythm while in possession. The midfielders brought in since Xavi left, merely left their mark. The team was once known for suffocating their opponents in possession but those days are gone.

In comes De Jong, with plenty of illusion, desire and courage to fulfill the gaping midfield and worthily the Dutch youngster has proved himself with his impeccable passes, first touch and vision, but he’s still yet to find his best role in the team as the coach is using him as a central mid than his usual defensive mid place, with Sergio Busquets who is no longer a starter, Valverde must rotate him more to keep him fresh for those March-April fixtures.

The rest of the midfielders are equally as irregular. Arthur enjoys his moments but Valverde has demanded more hard-work from him in defence. Arturo Vidal plays the role of a box-to-box midfielder and Croat Ivan Rakitic is clearly getting the signs that his time at the Camp Nou is up with very limited minutes.

La Masia prospects, Aleña or Riqui Puig could add more ‘Barça DNA’ to the team only if Valverde wishes so. But, as of now, it appears he’ll stick with what he knows best.

Barça have spent 345 million for Dembélé, Coutinho and Griezmann and none of them have produced anything fruitful so far. The club hasn’t recovered from the loss of Neymar and Coutinho has been already sent out on loan to Bayern Munich just one and half seasons later. The injury-prone Dembele hasn’t found his rhythm whilst Griezmann is still struggling to find his place in the team. Luis Suárez is in the twilight of his career and still doesn’t have a natural replacement. The Uruguayan and his fitness issues are becoming more of a concern to the club.

But there’s always one Lionel Messi. La Pulga is scoring every now and then but if he has an off day, the team struggles for creativity. The only other positive has been the arrival of Ansu Fati in the scene. The recently-turned 17-year old takes on his opponent easily and can score goals as well; and if nurtured properly he has the ability to take the world by a storm.

With Messi’s hattrick against Celta at home yesterday, it’s safe to say, Ernesto Valverde’s job remains safe, for now. But the million-dollar question is, “For how long?”

“I’m not worried about my future. The other day I had dinner [with Bartomeu]. I feel supported and respected. Whether you understand [the criticism] or not, it’s how it is. I don’t have much to say” he replies.

Watch : 16 year old Ansu Fati tears it up against Valencia in a 5-2 rout for Barcelona