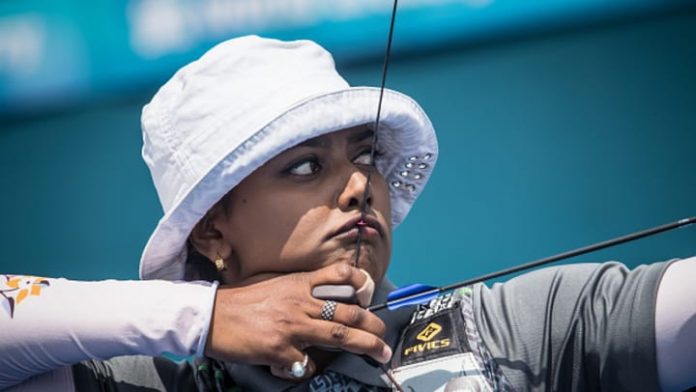 The three member Indian women archery team, consisting of Deepika Kumari, Ankita Bhakat and Komalika Bari have touched down in Paris with a mission- to secure their sport at the upcoming Tokyo Olympic Games.

The French capital will be hosting the final Olympic Qualification event on 20th June with handing the archers their last chance to book their flight to Tokyo in July. The women’s trio of the country, must secure a top three finish to earn their Olympics berth.

Currently stationed in Paris, the women trio are undergoing a 10-day quarantine period and departed before their men’s counterpart, who have already had their qualifications done and dusted during the 2019 World Championships.

“The Indian women archers are going through a mandatory 10-day quarantine. They went ahead of the men’s team because of the Olympic qualifiers,” Gunjan Abrol, the assistant secretaro of Archery Association of India (AAI) revealed to PTI on Monday.

Former world no 1 Deepika Kumari, will be making her third Olympics appearance after the 2012 and 2016 editions of the quadriennal event. The seven time Archery World Cup gold medallist and two time Archery World Championships silver medallist secured her individual quota two years back at the Continental Qualifiers that was hosted in Bangkok, Thailand.

Ankita Bhakat, currently ranked world number 51, won the gold medal in the recurve junior mixed team event with partner Jemson Singh Ningthoujam in the 2017 World Archery Youth Championships held in Rosario, Argentina. The 22-year-old from Kolkata is on the verge of making her Olympics debut.

The gold medal winner at the 2019 World Archery Youth Championships in Madrid, Komalika Bari hails from Jharkhand and had her first training in archery with the Indian bamboo bows. In 2016, she switched to recurve at the Tata Archery Academy (TAA).