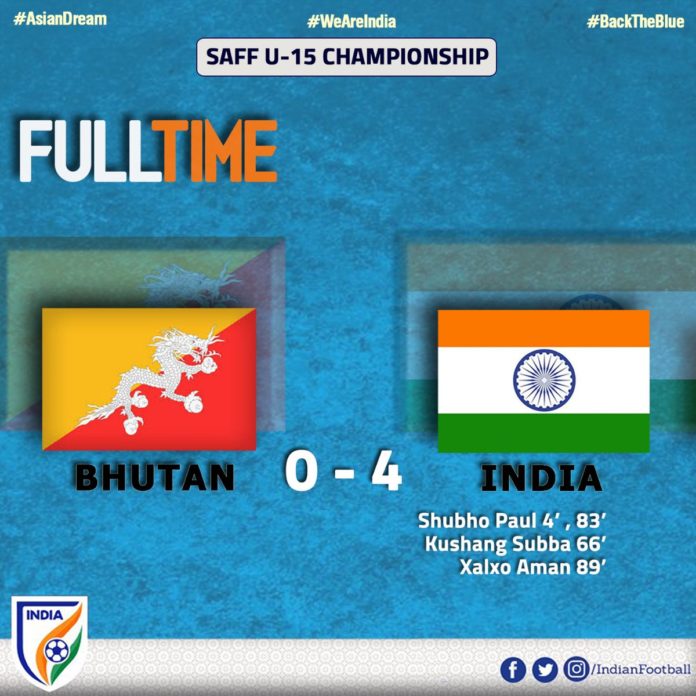 The Indian U-15 football team defeated Bhutan U-15 4-0 in the final group stage match of the SAFF U-15 Championship at the ANFA Complex in Lalitpur on Monday. They had earlier lost to Pakistan with a scoreline of 1-2 and would either take Bangladesh or Nepal on 1st November in the semi-finals.

The Blue Colts couldn’t have asked for a better start to the game as Shubho Paul gave India the lead at the 4th minute after converting from the spot. The duo of Shubho Paul and Subba Khushang created havoc for the Bhutanese defenders but rival keeper Dorji did well enough to avert the danger.

As the two sides came out of the tunnel, it was Bhutan who looked menacing. However, they couldn’t convert those chances into goals and India regained their midfield domination. At the 60th minute, India could have doubled the lead but Dorji made two back-to-back saves to deny them. However, his resilience was broken at the 66th minute when Subba Khushang found the back of the net.

FINAL SCORE: India U-15 beat Bhutan U-15 4-0 to enter semi-finals of the #SAFFU15Championship in #Kathmandu #BHUvIND #AsianDream #BackTheBlue

Bhutan pressed hard in search of goals, but the India U-15 team caught them off-guard on the counter as Shubho Paul found his second goal of the day at the 83rd minute. Substitute Aman Xalxo hit the final nail in the coffin by tapping the ball in at an empty net to give India an unassailable 4-0 lead.

The final scoreline remained the same as Bhutan bowed out of the tournament. The Sportsindiashow team wishes the India U-15 football team all the best for the ongoing SAFF U-15 Championship. Here are the highlights of the game courtesy of Indian Football-the Blue Tigers Youtube channel: