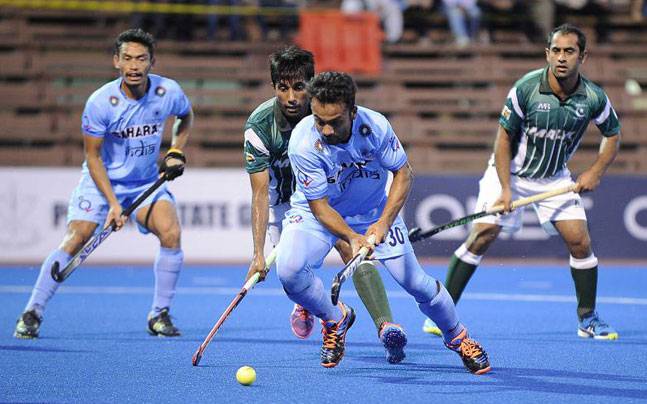 India continued their brilliant form at the 2018 Asian Champions Trophy by picking up a 3-1 victory over their arch-rivals Pakistan at the Sultan Qaboos Sports Complex on Saturday.

Pakistan stunned India when they drew first blood at the opening minute thanks to Muhammad Irfan Junior. Pakistan did well enough to hold their ground at the first quarter, but skipper Manpreet Singh broke the dogged resilience at the 24th minute.

The half-time talk from coach Harendra Singh did wonders for the Men In Blue as Mandeep Singh gave India the lead at the 33rd minute. Pakistan pressed hard for the equalizer, but striker Dileep Singh hit the final nail in the coffin at the 42nd minute to give India an unassailable 3-1 lead.

Pakistan’s efforts to score a consolation would go in vain as the scoreline remained the same at the full-time whistle. With this victory, India sit on the top of the group table with 2 wins and no losses, whereas, Pakistan are third on the table with a win and a loss.

India will next take on Japan on Sunday at 22:40 IST. On the other hand, Pakistan will look for nothing less than three points when they would cross swords with hosts Oman on Monday.