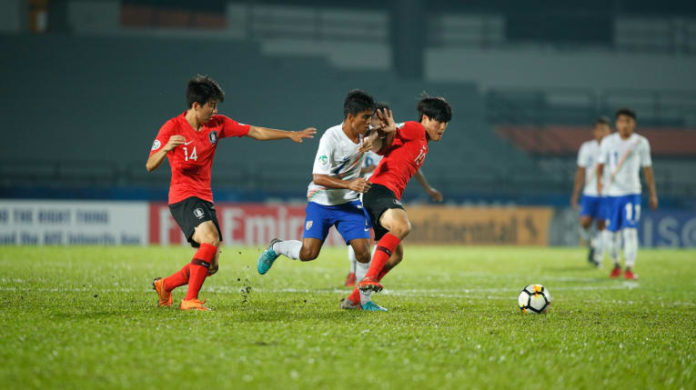 India U-16’s dreams of playing at the FIFA U-17 World Cup were crushed by a menacing Korean side in a nervy encounter. However, Bibiano Fernandes and the India U-16 team should be proud of themselves as they had held the favorites Korea to only one goal whereas Iraq, Australia, and Afghanistan succumbed 2-0, 3-0, and 7-0 respectively.

The first half began with the team in red throwing in a flurry of attacks, but goalkeeper Niraj and the Indian team had held their ground firm and denied the oppositions any clear-cut chance. At the 9th minute, the Koreans had got their first chance when Kim Ryunseong unleashed a deadly shot from inside the box, but Shabas flung in a last-minute sliding challenge to guide the ball for a corner kick.

At the 34th minute, Choi Minseo found enough space to shoot from outside the box, but Niraj’s heroics ensured the Koreans didn’t take the lead. Two minutes later, it was deja vu for the Korean striker, this time from inside the penalty box, but Niraj palmed the ball away for safety. At the extra time of the first half, Hong Sun-Wook had thrown in a nasty challenge near the sideline which caused a lump under the left eye of Ridge DeMello.

The India U-16 team had succeeded in absorbing the pressure and, the halftime scoreline read 0-0. However, when the two teams came out of the tunnel, India mounted enormous pressure in the initial minutes of the game and could have nearly taken the lead in the 52nd minute. Ridge Demello had headed the ball from inside the box towards an onrushing Givson Singh who unleashed a first-time shot from his right foot. However, the goalkeeper positioned himself perfectly and tipped the ball away for a corner kick.

Finally, after some resilient defending from the India U-16 team, the South Koreans drew the first blood. Niraj did his best to pad the ball away from a powerful shot outside the box. Unfortunately, the ball fell straight to the legs of Sang-bin who slotted the ball in an empty net.

The South Koreans were content with passing the ball amongst themselves as the India U-16 team looked to catch them off-guard. However, that couldn’t be the case as the referee had blown the final whistle, and India U-16 saw their dreams of playing in the FIFA U-17 World Cup being shattered right in front of their eyes.