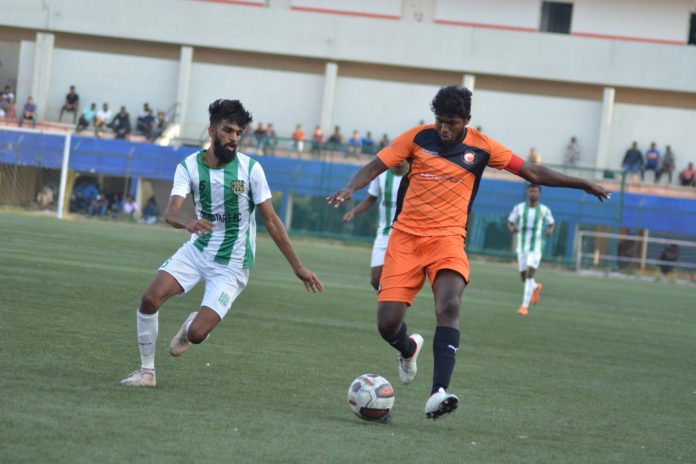 A South United FC team that was missing a few key players through injury and suspension managed a 1-0 victory over a determined Kickstart FC.

South United FC dictated all the early play keeping the ball and passing it around, but their task was made difficult by a resolute and organised Kickstart FC defence. The ball may have been South United FC’s but all the chances in the first half fell to Kickstart FC. South United FC’s goalkeeper Jayanth kept them in the game with a stellar few saves. 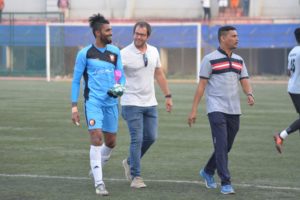 Wave after wave of SUFC attacks looked toothless for most of the first half with Kickstart’s low block in defence forcing them wide on most occasions. Kickstart should’ve been ahead on several breaks they had, the most notable being their striker being played through on goal and the SUFC custodian stranded having found himself at the edge of his box with the striker bearing down on him. Jayanth rushed back into position and a moment’s indecision from the striker meant that the eventual shot was wide.

South United spent overall at least 5 minutes of the first half playing with 10 men as their centre back Krishanu was treated for a blow to the head. He returned to the pitch for a short while, but eventually was unable to continue. His replacement was Kishori, which meant a reshuffle sending defensive midfielder Sharukh Rahman to slot in beside Nidhin Krishna as makeshift centre back, Sooraj moving into midfield, and Kishori leading the line.

They remained ineffective going forward as the half drew to a close. Kickstart threatened on a couple more occasions, but their finishing let them down

The second half began with more of an ebb and flow, both sides seemed to be going for the goal, but neither could find a penetrative attack in the early minutes.

Kickstart forged the first real chance of the second half through some clever play down the right wing on a break. The winger beat the South United left back in a footrace and played in a low cross to find a team-mate, but his ball was just behind the onrushing striker and smacked against a defender before being collected by the keeper.

South United FC found the goal they had been looking for as Riswanali was brought down on the left flank closer to the halfway line than the goal. Magesh stood over the freekick and played Manivannan through. The little winger ran onto the ball, knocked it past the defender and ran past him to knock in a cross that found Sooraj who made no mistake with his head from 6 yards out to give his side the lead.

Kickstart FC almost had the perfect response at the other end as they threatened from kick off, but the striker couldn’t keep his shot low under pressure from Nidhin. The goal breathed life into the South United FC attack, they seemed to find the openings they were missing earlier as Kickstart threw men forward as well.

The last few minutes saw both sides exchanging blows but SUFC showed strength and calm to keep their lead and collect all 3 points.