Indian captain Virat Kohli is considered as one of the best in the business – be it with the bat or captaincy. His temperament and aggressive nature on the field inspires many. While he is the best Test captain of India, he is one of the best captains in the limited-over games as well. 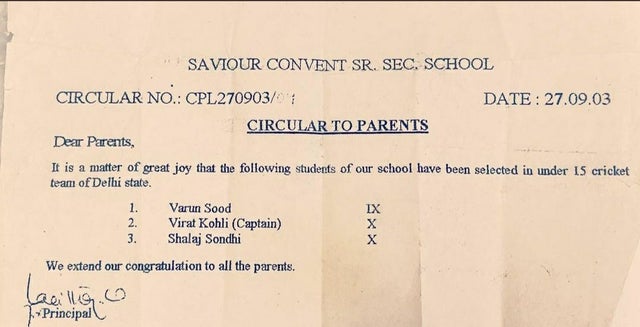 Although he failed to win an IPL title so far while leading Royal Challengers Bangalore (RCB), there shouldn’t be any doubt over his batting for the franchise as he is one of those players who has led from the front. Recently, a picture of a circular from his school became viral on social media where the school announced that three students including Virat Kohli have been selected for Delhi’s U-15 team and Kohli is named as the captain of the team as well.

However, Virat moved to Saviour Convent school in Paschim Vihar in the ninth standard only for better opportunities in cricket and this proved beneficial for him as he led Delhi’s U-15 team in the 2002–03 Polly Umrigar Trophy and scored 172 runs at an average of 34.40 as well.

He later led India in the U-19 World Cup and won the cup in 2008. Since then there was no looking back for him as he made his debut for India soon after. And, under his captaincy, India won the series in overseas countries like Australia, England, and New Zealand. He also led India to the finals of the Champions Trophy 2017 and the semi-finals of the World Cup 2019 as well.

Currently, he has been playing for RCB in the 14th edition of the IPL and they won all three games they have played so far. They last won against KKR and after the win, Yuzvendra Chahal said: “It’s an amazing feeling, when you are bowling well and not getting wickets, sometimes hurts. But getting that first wicket, I felt a bit emotional. I was trying to get him (Andre Russell) out, I wanted to bowl wider because the leg-side boundary was shorter, so after three balls, I changed my field. Their run-rate was over 10, I wanted to bowl more dot balls and just stuck to my plan. It will be a totally different wicket in Mumbai, there will be a slight turn but usually will be good for batting.”