Canelo Alvarez was only 23-years old when he fought Floyd Mayweather back in 2013. The fight ended in a humiliating defeat for Canelo as the American boxing star dominated him throughout the fight.

That fight broke all records as it was coined as the richest fight in the history of that time. It sold 2.2 Million PPV buys and generated a revenue of ₹1000 Crore ($150 Million). 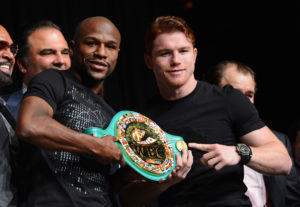 Ever since that defeat, Mexican superstar Canelo Alvarez has been gunning for a rematch against Mayweather, but it never came into fruition. Canelo said, “would love to have the opportunity to avenge that defeat.”

Floyd Mayweather made ₹290 Crore ($41 Million) from that fight. Although Floyd since then has fought Manny Pacquiao and Conor McGregor, which shattered the pay-per-view record set by the Canelo fight back in 2013.

Floyd Mayweather made around ₹2100 ($300 Million) crore from both the fights respectively and has retired since. He fought Tenshin Nasukawa on New Year’s Eve but said that it was an exhibition bout and won’t go up on Mayweather’s boxing record. But former boxing champion Oscar De La Hoya wants Floyd to come out of his retirement and fight Canelo Alvarez in a highly lucrative bout.

“If Floyd Mayweather decides to come back, a fight with him and Canelo could be a $1.5 billion fight,” De La Hoya told TMZ Sports.

“Floyd is retired… so there’s no fight to make,” De La Hoya explained. “If Floyd did want to come back… he should stop fighting fighters that are two weight divisions smaller than him.”

It’s highly unlikely that a 42-year old Floyd comes out of retirement to fight Canelo, who is in his physical prime.